A lift station at the Crystal Lake Wastewater Treatment Division had been clogging due to flushable wipes and other debris. Xylem solved the problem with its Flygt Concertor intelligent pumping system, which automatically adapts to changing wastewater conditions.

Crystal Lake, Illinois, is a city located about 45 miles northwest of Chicago with a population of about 40,000. The Crystal Lake Wastewater Treatment Division is responsible for the operation and maintenance of two wastewater treatment facilities. The facilities process an average of 4.3 million gallons of water per day, or 1.6 billion gallons annually.

The city has 27 sanitary lift stations and three storm water stations. These include over 65 pumps, some of which were installed in the late 1980s. Each of these stations is subject to routine inspections to ensure their proper operation and maintenance.

As part of the minor capital improvement process, lift stations are renovated and updated prior to the equipment reaching the end of its service life. Updated technology is installed to maximize efficiency and prevent system failures.

Sanitary Lift Station 13 had experienced occasional clogging problems for a few years. As a satisfied owner of over 40 submersible pumps using both PLCs and SCADA, Crystal Lake turned to Xylem for a solution.

The pumping system automatically adapts to changing wastewater environments in order to deliver an optimal level of performance, while significantly reducing total cost of ownership. The built-in intelligence makes it easier and quicker to set up and run functions that would otherwise require a very sophisticated monitoring and control system. Flygt Concertor also has a significantly smaller footprint. 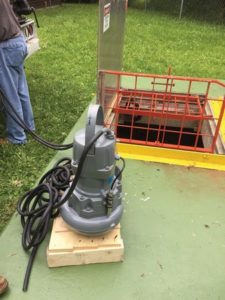 The Concertor system was installed and began operation in July 2015. During installation, the city did not allow modification to the existing control panel. The existing motor starter and pump protection had to remain in place in the event the old pump had to be reinstalled. Concertor does not require these items to operate, so slight modifications were required to make it work with the existing station controls.

Regardless, the installation was smooth, and it took only a few hours to install the pump and control. No consulting engineering firm was used. Xylem’s engineers sized the new system based on information provided by Crystal Lake.

Since installation, all clogging issues have been eliminated. Inspections have also revealed very little sediment and grit build-up in the station, and varying start levels has prevented grease ring build-up, which is a great benefit.

Crystal Lake staff previously cleaned out the station every three to four months. The new system did not require this cleaning for eight months, which saves the city an estimated $800 to $1,000. The Flygt Concertor pumping system also significantly reduced energy consumption.