When a North Carolina utility needed to replace an aging force main sewer line, Xylem helped develop a sewer bypass solution. The use of Godwin electric pumps and Godwin Field Smart Technology saved thousands of dollars in man-hours and $1 million in fuel costs.

Recently The Cape Fear Public Utility Authority (CFPUA) in North Carolina engaged in a capital improvement project to help address their aging infrastructure. The project included the replacement of a ductile iron pipe (DIP) force main, which was susceptible to sanitary sewer overflows.

The rehab project called for the replacement of approximately 5,140 linear feet of the 20-inch DIP force main. To make the pipe replacement possible, a 100 percent redundant sewer bypass system was required. The bypass needed to be capable of handling maximum peak flows of 13.5 million gallons per day (MGD).

SUC brought in engineers from the local Xylem rental branch to work closely with SUC and Kimley-Horn consulting engineers to assess the complexities of the project and to develop a bypass plan.

“Engaging Xylem in the planning and execution of this project gave us the reassurance that we were addressing our needs,” says Dustin Wagner of State Utility Contractors. “Their team of engineers was able to identify some of the challenges upfront, saving us time, money and headaches throughout the project. They have the expertise to know what it takes to get the job done, and that put our minds at ease.”

They chose electric drive pumps to save diesel fuel costs during the seven-month project. Each of these Godwin pumps was designated as the primary bypass pump and equipped with a Godwin Variable Frequency Drive (VFD), allowing the electric pumps to change speed according to flow. 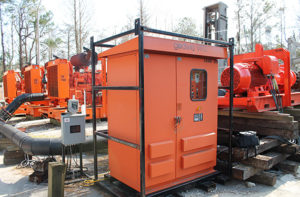 The next component of the bypass was the eight smaller pump stations feeding into the primary bypass. Xylem engineers recommended that SUC install temporary valves (line stops) at the ends of each section as part of the bypass system to reduce the risk of a spill. SUC ultimately installed the line stops, and then removed them, as each section was tested and reconnected.

The third and final component of the bypass plan was to put contingencies in place in case of an emergency. Any spill during the bypass operation would be unacceptable, negatively impacting the environment and potentially costing SUC significant fines from the Environmental Protection Agency.

But the teams knew the best way to mitigate the impact of a spill is to plan for it, so Xylem, SUC and Kimley-Horn worked closely to design an emergency response contingency plan for any potential mishaps. The plan outlined how an emergency would be handled, information about how back-up equipment would be provided, and action steps for the plan implementation.

For sewer bypass operations like this rehab project, utilities or contractors would typically engage in a “pump-watch” patrol. This patrol would keep an eye on the system 24/7 to be sure that the pumps were handling the required flow and averting any possible environmental disasters. With Godwin Field Smart Technology (FST) providing 24/7 automated monitoring, the onsite manual “pump watch” wasn’t necessary.

With the implementation of the FST technology, combined with the use of electric drive primary pumps, SUC saved thousands of dollars in man-hours and $1 million in fuel costs, significantly reducing the cost of the overall project.