Canada’s Region of Peel is a permanent home to more than 1 million people and a temporary stopover for another 20 million air travelers who pass through Toronto Pearson Airport each year.

Those numbers add up to make Peel Region the second largest province in Ontario, and Toronto Pearson the busiest airport in all
of Canada. They also added a high level of complexity to a recent wastewater construction project, which Atlas and Xylem teams solved with an equally intricate bypass solution.

To engage in ongoing reconstruction and development of their sanitary sewers and manholes, Peel Region needed to finish a significant infrastructure connection under the airport runway. This involved the twinning of the Etobicoke Creek Trunk Sanitary Sewer line to provide system redundancy.

Adding to the challenge, the entire project had to be done without interruption to airport operations. To make that possible, work crews were in constant contact with airport personnel, including daily security clearances for staff and equipment, and maintained a minimum eight-meter Runway Object Free Area for worker safety.

The primary 1,800-milimeter (mm) sanitary sewer line at Etobicoke Creek feeds into two smaller lines – 1,650 mm and 1,200 mm in diameter – via a splitting chamber. (In non-metric terms, these lines are 71 inches, 65 inches and 47 inches, respectively.) As part of

the reconstruction effort, each of these lines had to be temporarily diverted to allow access for valve upgrades, manhole work, and connection to the new twinned sewer line and chambers. 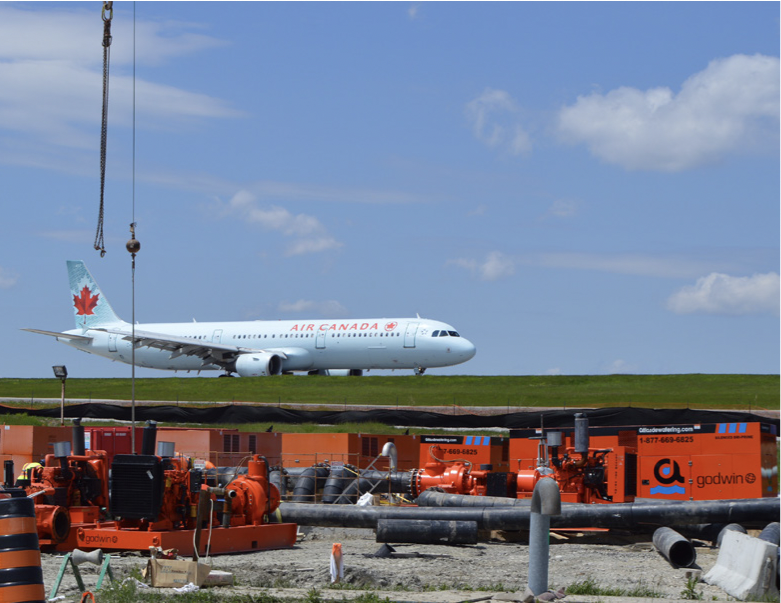