Solving water through partnerships and cooperation is a key way to accelerate change – and the theme of 2023 World Water Day, led by UN-Water. One municipality setting the pace for creative partnerships is the City of Houston.

Like many modern urban water operators, Houston Public Works faces growing pressures. The utility needs to seamlessly deliver essential water services to a community of more than 2.3 million people. At the same time, it has to trial new approaches to tackle escalating water challenges and engage citizens to help do their part to protect our most precious resource.

Reaching the public in fresh ways

For years, Xylem and Houston Public Works have collaborated to strengthen the city’s water systems through technology and innovation. Recently we joined forces to raise public awareness and engagement as well. During Manchester City’s pre-season tour of the US, the English Premier League Champions teamed up with Xylem and Houston Public Works to launch a creative campaign on disaster preparedness featuring international football stars to bring attention to a difficult but critically important topic.

“Houston faces complex challenges when it comes to water,” said Houston Public Works Director Carol Haddock. “We receive 50 inches of rain per year, frequently causing flooding. Yet, we are also hit with droughts, as we have experienced in recent months."

"Leveraging the Xylem and Manchester City partnership, we’ve tapped into the popularity of sports to raise awareness of water issues and disaster preparedness, and the actions everyone can take to make our city more resilient.”

Andrew Swirsky, Digital Solutions Manager at Xylem and native Houstonian, said: “The City of Houston has been a trailblazer in leveraging innovative technologies to improve their water systems. Xylem has had the honor to partner with them over the years in this vital work, including providing industry-leading digital solutions to help build out their smart water network. It’s been exciting to team with them once again to bring this same spirit of innovation and partnership to raise awareness of water and climate challenges.” 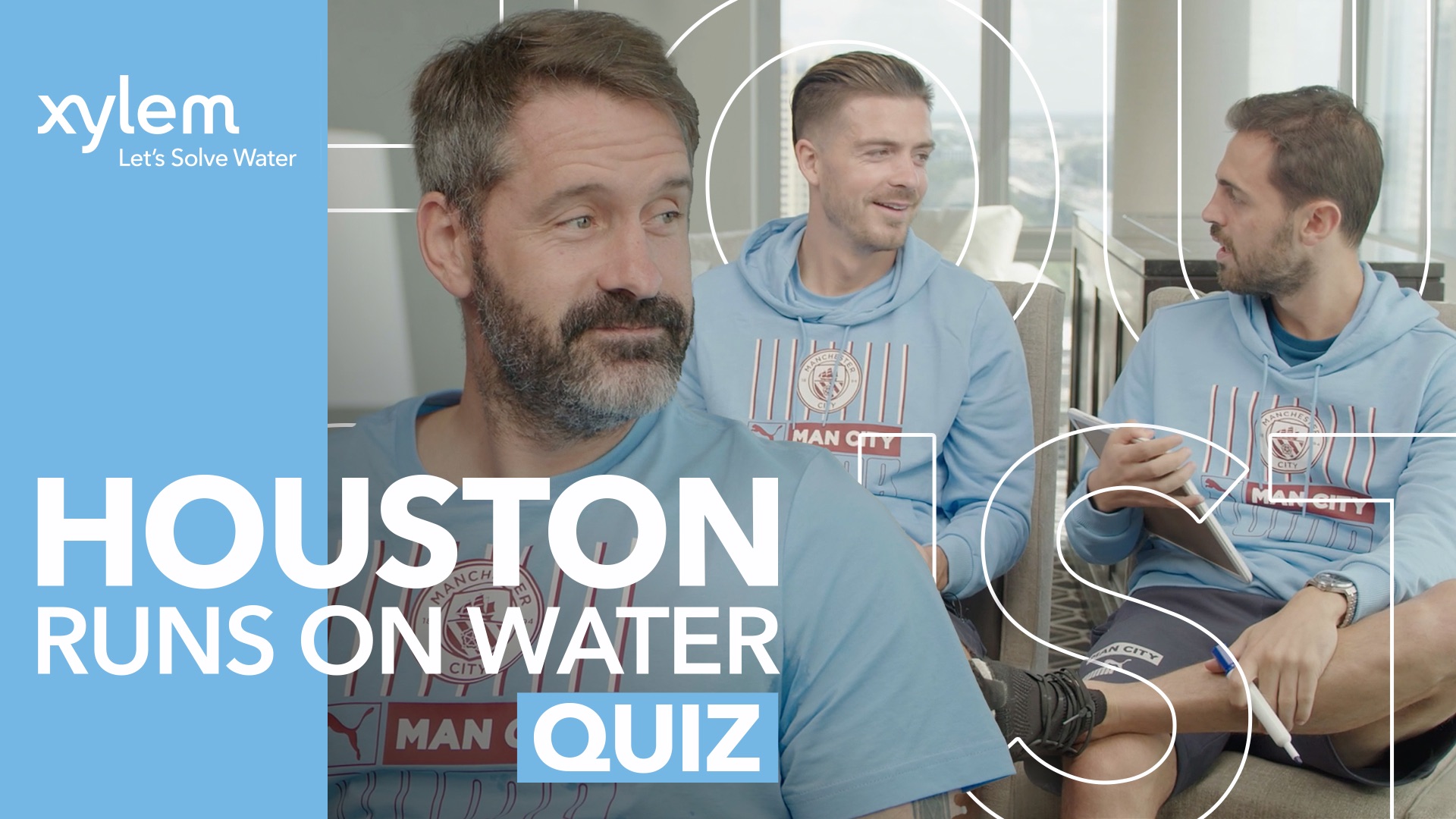 In recent months, the City of Houston has grappled with record high temperatures and drought conditions, followed by heavy rains and flooding. This follows a number of devastating severe weather event in recent years. Since 2015, Houston experienced three 500-year storms, including Hurricane Harvey, which caused $125 billion in damages.

The “Houston Runs on Water Quiz and Social Media Campaign” focused on the impacts of Harvey and severe rain events in the region. Through film and social media shorts, Manchester City football players Jack Grealish, Bernardo Silva and Scott Carson quiz one another on their disaster preparedness IQ – spotlighting water and disaster preparedness information that is fundamental to everyone in the community.

Engaging the public online and on the field

The two-week campaign, which wrapped up earlier this month, delivered over five million impressions across multiple social media channels and over 26,000 clicks to the Xylem Disaster Response page.

In addition to the awareness initiative, the City of Houston, Xylem and Manchester City teamed up over the summer to provide a football and water education clinic for youth in the Houston area to educate about the importance of water conservation.

“Our work with the City of Houston and City Football Group to raise awareness of water challenges and disaster preparedness is a great example of the important impact you can make through creative partnerships,” said Randolf Waters, Senior Director, Global Branding and Partnerships at Xylem. “We look forward to building on this effort and bringing our public engagement model to others in the water sector and beyond.”

Said Haddock: “The campaign was another example of how Houston Public Works is partnering and innovating to help Houston take on the water challenges we face. When we bring people together around the goal of solving water, we create a more water-aware and resilient community.”

More on Xylem’s disaster response and the public awareness campaign.

Webinar: Going Beyond AMI – The City of Houston’s Holistic Approach to Building a Smart Water Network

COP27: 5 take-aways for the water sector

Ways innovation is building a movement to solve water