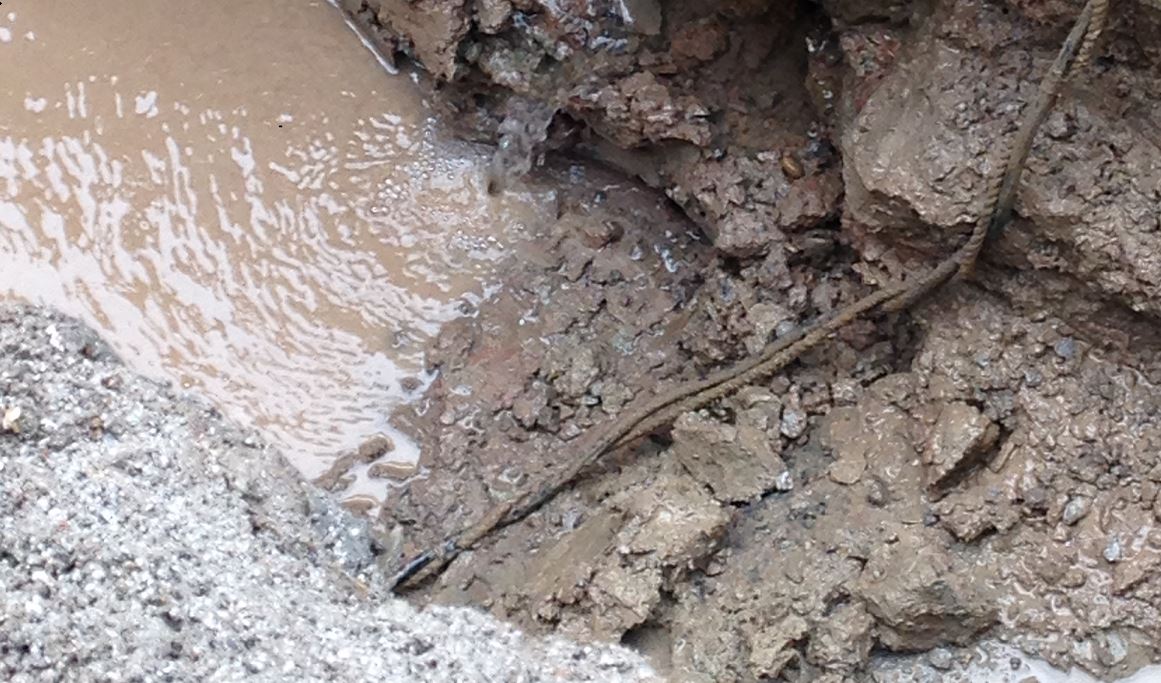 A leak represents not only water loss, but can indicate the potential for pipeline failure.

It takes a lot more than luck and traditional acoustic correlation methods to locate a suspected leak on large critical mains. Not all leaks are obvious, and some leaks can seep for years without visibly surfacing, putting utilities at risk for catastrophic failure.

That is why a proactive leak detection strategy plays such an important role in any asset management program. It allows utilities to obtain the general condition of their mains, since a leak not only represents a real water loss, but can also indicate the potential for pipeline failure.

Inline leak detection technologies use non-destructive methods in which acoustic sensors are inserted into a pressurized pipeline. The “hissing” sound or vibration resulting from a leak in a pipe transmits an acoustic signal collected by the sensor when passing the leak site. The amplitude and frequency of the sound depends on the pipe material and internal pressure, and is easy to distinguish from other pipeline sounds.

Pure Technologies has developed two inline leak detection platforms for large-diameter pipelines of all materials: Sahara® (with a tethered sensor) and SmartBall® (a free-swimming tool).  Both tools are equipped with a sensitive acoustic sensor that can locate very small leaks (as small as 0.1 l/min) with high location accuracy. 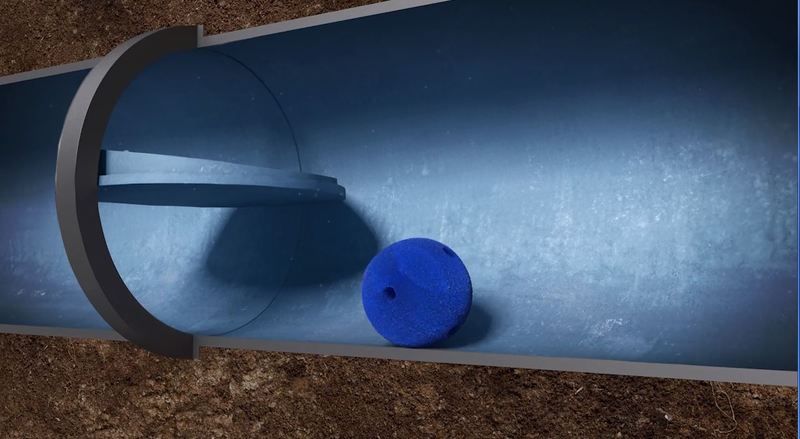 The SmartBall tool can be launched while the main remains in operation, limiting disruption to service.

The SmartBall platform is an innovative technique to identify leaks and gas pockets in large-diameter pipelines while the line remains in service, minimizing disruption. The free-swimming ball contains a sophisticated leak detection circuitry and is released untethered into the water flow often through an air valve or hydrant (any 100mm opening). The SmartBall follows the water flow and is tracked by surface mounted sensors as it rolls through the pipe making a continuous recording of the acoustic activity in the pipeline. At a downstream location, the ball rolls into the retrieval device and is extracted from the pipe. The data is then evaluated to report the presence of leaks and gas pockets.

Since the SmartBall is propelled by the water flow, it can be used to survey the subject main for long distances (battery life up to 20 hours) in one deployment. As a result, modifications to the main are significantly reduced.

The tethered Sahara platform provides acoustic data on the presences of leaks and gas pockets and has the ability to map the pipeline alignment.

Utilities have long relied on the Sahara leak detection platform for speed, accuracy and real-time results.

The tethered platform identifies leaks and gas pockets by providing acoustic data on the presence of leaks for distances up to 1,800 meters (6,000 feet). The tool also has the ability for mapping the pipeline alignment, and is equipped with CCTV, adding an assessment.

The tool can be inserted into an active pipeline, through almost any tap two (2) inches and greater. As the Sahara tool enters the pipe, the flow velocity of the water inflates a small parachute, which pulls the tool through the pipe, with the probe lighting the way, highlighting any visual defects in the pipeline.

If the Sahara tool encounters any acoustic events – such as a leak – the operator can stop the tool at the exact point of the leak. At the same time, an above ground operator locates the sensor, marking the exact leak location within plus or minus 0.5 meters (18 inches). This enables users to know in real time where leaks are located.

In March 2016, the City of Vancouver retained the services of Pure Technologies to perform a condition assessment of the Powell-Clark Feeder Main. The pipeline is comprised of concrete cylinder pipe (PCCP/BWP), ranging from 750 to 900m in diameter, installed in 1986-87. 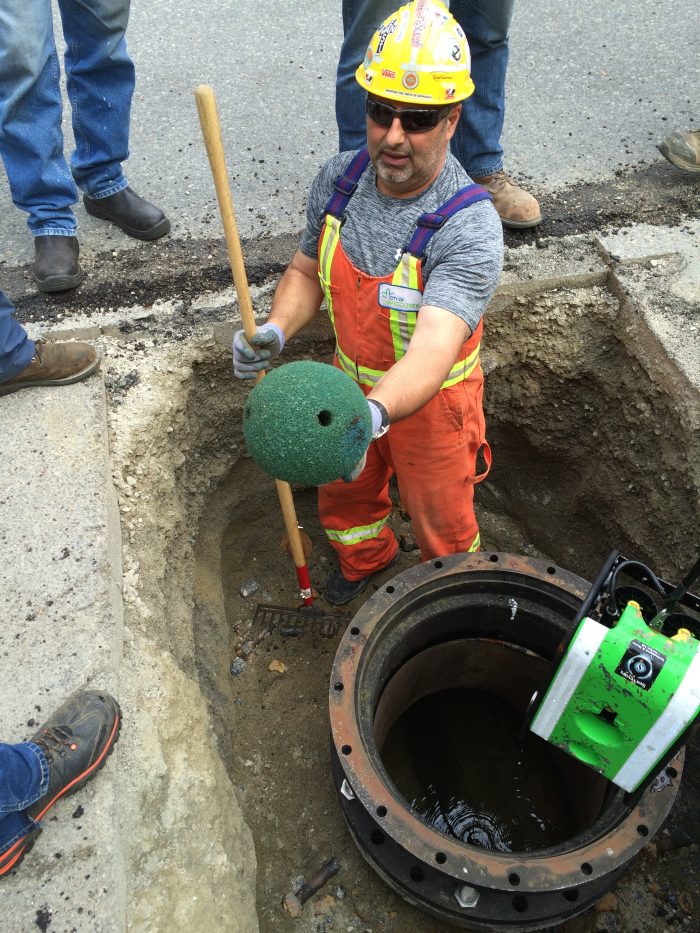 The SmartBall tool was successfully retrieved with the acoustic data intact.

The SmartBall tool was inserted into the pipeline through a flange access and acoustic data was collected and recorded as the tool traversed the pipeline. At a distance of 5.8 kilometers, (470 meters from the end of the inspection run), the tool stopped, which was confirmed by the live tracking software. By analyzing data from the earlier PipeDiver EM inspection, Pure determined that unknown debris likely lodged the SmartBall tool.

The City excavated and modified a tap to allow Pure to access the pipeline with a submersible ROV (equipped with a camera) to retrieve the SmartBall tool and examine the debris, which turned out to be an old tool cart. The cart and SmartBall tool were extracted, and the data considered valid.

Analysis indicated three (3) anomalies characteristic of leaks and zero (0) pockets of trapped gas. Two (2) instances of entrained air were identified as migratory acoustic anomalies, and flagged for future inspection, as they may develop new pockets of trapped air.

When combined with the results from the EM inspection, the condition data will be used as part of the City of Vancouver’s asset management initiative and allow for proactive measures in the management of their infrastructure.

In December 2016, Pure Technologies performed a leak detection survey on the 30-inch Robinson Street Replacement Water Main (RSRWM) for McKee Utility Contractors (McKee). The RSRWM is owned and operated by the City of Norman, Oklahoma.

McKee suspected a leak on the pipeline, as the RSRWM was failing to hold pressure during the 150 psi hydrostatic pressure test. As a result, McKee requested that Pure Technologies inspect 4,248 feet of the RSRWM and pinpoint any leaks in the inspected section.

The Sahara platform was selected for its ability to provide same-day results, and to accurately locate small leaks with sub-meter accuracy. The tethered tool is propelled by a small parachute inflated by the product flow, requiring a flow velocity as little as one foot per second to progress through a water main.

Because the pipeline was not yet in service, the flow was generated with a city connection pushing water into the main, and a 12-inch blow-off spewing it out. The Sahara audio-visual (AV) sensor was deployed to the endpoint using the flow velocity provided by the blow-off. 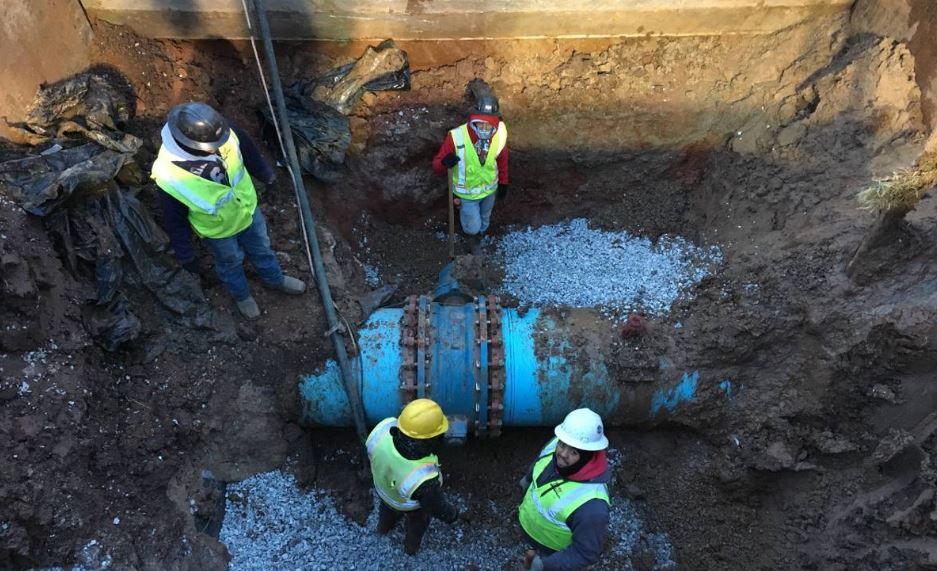 After the leak was located and marked above ground, McKee quickly excavated around the butterfly valve, tightened the bolts and eliminated the leak on the same day.

As a result of the survey, 4,294 feet of the RSRWM was inspected, with two leaks located.

Leak 1 was located 1000 feet from the first insertion. Video from the Sahara tool showed that the leak was located on the mechanical joint securing the inline butterfly valve to the pipeline. The Sahara team located the leak, and marked it above ground and McKee was able to start excavating immediately. After quickly excavating the butterfly valve, McKee was able to tighten the bolts on the BFV, eliminating the leak the same day as the excavation.

A second leak was located, marked above ground, excavated, and repaired the same way as the first. After repairing the two leaks found, the line passed pressure test.