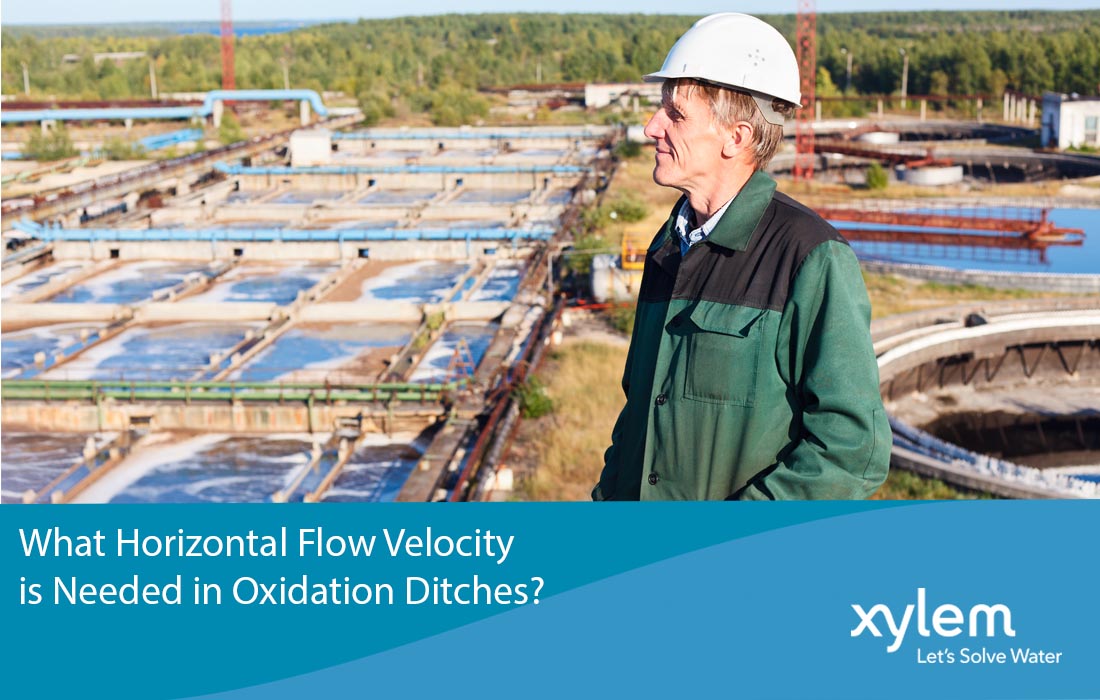 What Horizontal Flow Velocity is Needed in Oxidation Ditches?

Maintaining appropriate horizontal flow velocity has a significant beneficial effect on oxygen transfer rates and the efficiency of oxidation ditches.

The concept of a required flow velocity for mixing in biological wastewater treatment systems (activated sludge processes) apparently dates back to the introduction of grit chambers intended to capture solids settling out in a flow of 0.3 m/s. The remaining solids would remain suspended through the biological treatment before settling out in the secondary sludge.

Since then, fine screens and primary clarifiers have made it possible to reduce mixing flow velocity. Suspension of activated sludge and inflow blending (i.e. contact between organics, nutrients and bacteria) are now the main criteria for determining an effective flow velocity, unless heavier solids remain after both preliminary and primary treatment. In these cases there are local de facto standards prescribing a flow of, for instance, 0.25 m/s or other value.

While tanks are sometimes designed without an underflow or near bottom outlet for the release of heavier solids, increased mixing flow velocity may be applied to ensure washout of heavier solids that get into the process.

Throughout the world, various formulations are used in mixer selection such as “minimum velocity,” “bottom velocity,” or “average velocity.” So, what does “flow velocity” mean as it pertains to a mixer’s function in an oxidation ditch?

The solid bottom and walls of a tank enforce a zero flow velocity (the well known “no-slip” condition), meaning that the flow velocity you observe tends to zero close to the bottom. Therefore, there is no point in specifying a minimum velocity, unless a minimum distance from the solid boundaries is also specified. The same holds true for bottom velocity, where the distance should be taken at e.g. 20 cm above the bottom.

Another fact is that velocity changes significantly over time in almost all parts of the tank, and it changes even as one moves to observe it from different points. This variation in velocity at any given point in a tank is usually defined as a time average.

The average velocity is typically a cross sectional average. This is obtained by sampling the flow velocity in a number of points, in a section perpendicular to the main flow of the ditch. The testing process uses a mathematical operation described in the Flygt “Handbook of Mixing for Wastewater and Similar Applications” (Xylem, 2012).

This average flow velocity is most commonly what specifications refer to. It amounts to the volumetric flow rate along the ditch, divided by the cross sectional area. If there is a strong inflow and outflow, the distance from one to the other has a markedly higher average velocity than the remaining distance along the ditch.

Another term, “mass average velocity,” is important in some applications, including when the process design requires certain times of passage across and between aerated zones.

While the degree of pretreatment is important for solids suspension in the flow, the ditch layout should prevent bypassing of inflow currents.

Another aspect of horizontal flow velocity is becoming increasingly important now that tanks are built deeper and use fine bubble diffused aeration systems with higher air flows. The velocity must be high enough for the horizontal flow to dominate the spiral flows generated by the bubble plumes from the aeration systems. (Read more about this in the blog post “Why is mixing needed in oxidation ditches?”)

This requirement may result in velocities greater than 0.40 m/s in realistic applications. A future post will demonstrate how to achieve this and still maintain a robust and highly energy efficient operation.