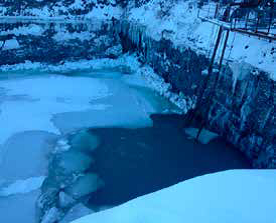 As the stone quarries in the Château Richer region of Quebec
began to exhaust their supply of stone at the beginning of the 20th century, new sources of limestone began to be mined in the nearby municipality of Charlesbourg West. In September 1936, Union Quarry Limited, a specialist in the production of crushed stone, was founded. The company has stayed in the hands of a single family since 1944 and has become one of the primary producers of crushed stone in the Quebec region, due to the quality and diversity of its finished product.

During the cold winter, the Quebec region enters a deep freeze, with temperatures often reaching -25 degrees Celsius. Union Quarry’s primary basin, measuring 100 feet long by 80 feet wide with a depth of 40 feet, was encountering problems during the coldest months

as pump cables & tubes continued to break. The problems were caused by the formation of thick layers of ice on the surface of the quarry’s basin. As ice formed on the surface of the quarry, the weight of the ice would press against the exposed cables and hose of its two Flygt B2151HT submersible pumps, causing the equipment to fail and requiring maintenance crews to conduct repairs before the pumps could be restarted. 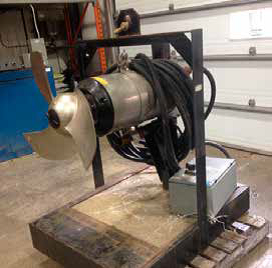 In addition, the quarry’s staff was forced to devote significant time overseeing the repairs. Safety issues were also a major concern, as the crew carried out the work of freeing and replacing the cables over the icy waters of the basin. As the costs of keeping the pump cables free of ice continued to mount, Union Quarry turned to the Xylem branch near Quebec City to come up with a solution to solve the ice issues around its installed pumps and to do so in the most energy efficient way possible. The major challenge involved how to prevent ice from forming around the submerged pumps in weather that approached -40 degrees Celsius when the wind factor was taken into account. 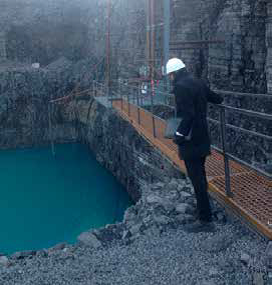 The problematic ice formations that had been causing the breaking of cables and equipment were resolved once the submersible mixer was installed.

With the mixer operating, a continuous circulation of warm water from the bottom of the basin to the surface was created and ice was unable to form in the area around the quarry’s submerged pumps.

The pumping system was able to work continuously without any downtime, even during the coldest days of January 2014. Significant savings were realized as ice breaking equipment no longer need to be rented and most importantly, safety issues were minimized. The staff at Union Quarry recognized the outstanding service of the Quebec Xylem branch. “Finally a solution to my problems, thank you!” affirmed M. Andre Robitaille, the superintendent of Union Quarry. A Flygt 4680 submersible mixer was installed to discourage ice from forming near the cables. 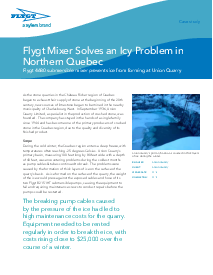