Up to 15 percent of the world’s cargo traffic is handled in the Baltic Sea, making it one of the busiest areas for ship traffic in the world. As part of an EU project, a yacht has been modified with Xylem water-monitoring technology to research the environmental impact of shipping in the region.

Today the Baltic Sea is heavily trafficked by a variety of ships, including ferries, cruise ships, oil tankers, car carriers, and container and other cargo ships. Due to its narrow straights and shallow waters, the sea is difficult to navigate. In some of the major ship lanes, one large ship passes on average every ten minutes.

The ever-expanding shipping and tourism industries have led to growing environmental pressure on the waterway. This pressure manifests as increased air, water, and noise pollution, presenting a clear threat to the future of the Baltic.

A new project on sustainable shipping

In 2010, the European Union (EU) launched a joint research and development program on the Baltic Sea called BONUS. It focused exclusively on developing a sustainable economic and ecological plan for commerce in the region. In 2015, BONUS began funding the SHEBA project, which is studying the environmental effects of shipping in the Baltic Sea region.

The project, which will continue until 2018, is supported by a wide range of stakeholders. These include atmospheric and oceanographic scientists, economists, and experts on shipping, environmental policies and law. A significant portion of SHEBA focuses on gaining a better understanding of pollution.

Turning a yacht into a mobile science lab

In 2016, a former long-distance race yacht was converted into a mobile science lab for the SHEBA project. Its mission is to sample water and air quality conditions in the heavily travelled ship lanes. Using a sailing vessel with no engine emissions, the Hrimfare af Ranrike, removed the potential problem of self-contamination and possible impacts on the accuracy of the measurements.

During the 2016 summer expedition, the boat was packed with equipment to measure and collect samples in the atmosphere and in the water as it roamed the Baltic Sea, crossing ship lanes perpendicularly. A cluster of surface skimming sensors were attached to a stainless-steel pole and mounted about one meter below the surface in the stern of the boat, so that measurements were undisturbed by the boat itself as it advanced.

The sensors collected data on dissolved oxygen, salinity, temperature, pH, pCO2 (carbon dioxide partial pressure) and oil. A SmartGuard sensor hub, from Xylem’s Aanderaa brand, was placed in the forward sail locker to record data from the sensors and the ship’s GPS every 20 seconds.

As the Hrimfare crossed ship lanes, changes in most of the measured parameters could be clearly detected. Differences in the surface water inside and outside the shipping areas lanes could be attributed to the mixing of the upper ocean by the large vessels. These ships also expel engine cooling and scrubber water, as well as wastewater from the crew living onboard, which affect the water quality of the sea. 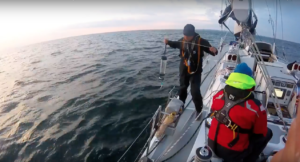 To gain a better understanding of the mixing occurring in deeper layers caused by the ships traffic, Hrimfare stopped at regular intervals to deploy a SonTek CastAway CTD from Xylem. This hand-operated device has built-in GPS for geospatial mapping of salinity, temperature and depth measurements. Each stop included two to three consecutive profiles and took less than five minutes.

Two self-recording acoustic profiling instruments were also dropped below the ship lanes to measure currents in thin layers from the bottom to the surface. The instruments also measure salinity, temperature, dissolved oxygen and suspended particles (turbidity). They are typically deployed for 6-12 months, recording data at least every hour.

Detecting air pollution from ships and nearby land

Continuous air measurements were done by mounting a sampling tube in the mast through which air was pumped into a set of instruments installed below the deck. The measured parameters included CO2, NOx, SO2, size-resolved particulate matter (PM) and soot (black carbon).

Initial analysis of the data showed that signatures of exhaust plumes from individual ships could be identified for the measured gases and particles. For example, when passing a scrubber-equipped ship, clear signals for NOx, CO2 and PM could be detected. The air pollution from nearby land regions could also be detected. These measurements are similar to those done in urban areas when studying air pollution from traffic and industry.

Racing to the finish of the project

As the SHEBA project nears its completion, the data from vessels like the Hrimfare af Ranrike are critical to making sound policy decisions going forward.

With a better understanding of how the shipping sector is impacting the air and water in the region, stakeholders expect to see heightened regulations related to ballast water pollution and waste discharge, among other drivers. This policy change would likely be matched with tighter enforcement and an increased effort to boost adoption of eco-friendly technology within the commercial shipping industry.

The long-term solution to environmental stress in the Baltic Sea is to incorporate emission reduction as a fundamental pillar of future industrial ship designs, whether that is through enhanced waste management, inclusion of alternative propulsion methods, or more efficient use of existing style engines. This is no simple task, but if the SHEBA project is any indication of the power of multinational cooperation, then we are on the right path.