The city of Ningbo subway system, located in the China province of Zhejiang, is among the most convenient and fastest modes of transportation in the city. With a population of 7.6 million people, the city and surrounding municipality is one of the most developed areas in the province and the subway system plays a crucial role in keeping things moving smoothly.

However, because of the rapid development and growing need of the metropolitan transportation system, transportation agencies were faced with many challenges, including controlling rising energy costs.

In order to tackle these challenges, the Ningbo Metro Plan 2015 was created. The plan included building six new metro rail lines inside the urban area of Ningbo, connecting the cities of Haishu, Jiangbei, Jiangdong, Zhenhai, Beilun and Yinzhou. With the first phase of Line 1 estimated to be finished in 2014, identifying partners that could meet the challenges of building this massive project was a priority.

A critical element of the plan was installing an energy efficient heating and cooling system that would keep the millions of passengers comfortable while providing cost effective operation. Since the climate could range from an average temperature of 40 degrees F in the winter to 82 degrees F in the summer, a highly efficient heating and cooling system was required 24 hours, seven days a week.

With the HVAC portion of the contract worth more than $1 million, many industry-leading companies bid on the project. A scoring system was established and each of the bidders was evaluated on a variety of factors. When all the tallying was completed, Xylem received the highest score and was selected for the project. The top score was achieved based on the product’s high cost-performance ratios and technical advantages that surpassed the key competitors.

Jiang Guanghui, building service market sales representative with Xylem China Technology Center, understood that a project of this size and complexity must meet stringent specifications and special challenges that would constantly evolve throughout the process. Fortunately, with such a broad range of products available from Bell & Gossett®, he was able to recommend the products that would meet project requirements. 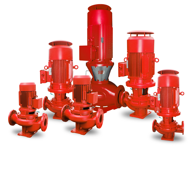 Guanghui recommended using Bell & Gossett GLC series vertical double suction inline pumps as they provided the energy-efficiencies and trouble-free maintenance that best fit the plan. Based on that recommendation, more than 200 GLC pumps were specified for the project. In addition, the plan required booster pumps for the fire suppression system resulting in specification of over 41 Bell & Gossett horizontal multistage pumps.

The Bell & Gossett pumps were specifically developed by the Xylem China Technology Center based on the project needs. These pumps were selected due to their competitive advantages that included: high efficiency, trouble-free maintenance and space-saving designs.

The success achieved by Xylem demonstrates the strong commitment to delivering valuable customer service based on client understanding.