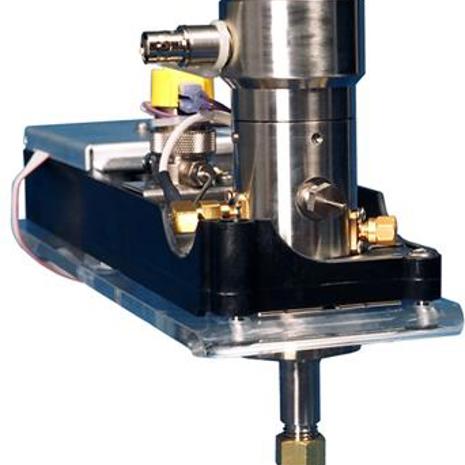 The OI Analytical 4430 Photoionization Detector (PID) is a uniquely-designed gas chromatograph (GC) that selectively responds to aromatic and olefinic hydrocarbons in the presence of alkanes and other saturated hydrocarbons.

The OI Analytical 4430 PID’s unique patented Window Sweep™ design prevents the sample stream from contacting and contaminating the lamp window. It also allows analysis of photosensitive compounds, which would otherwise combine to form a polymer on the window surface.

The sample stream flows through the detector’s reaction chamber where it is continuously irradiated with high-energy ultraviolet light. Compounds that have an ionization potential lower than the irradiation energy (10.2 electron volts with standard lamp), are ionized. The ions formed are collected in an electrical field, producing an ion current that is proportional to compound concentration. The ion current is amplified and output by the gas chromatograph’s electrometer.

OI Analytical’s patented tandem GC detectors combine a photoionization detector (PID) with an FID or second selective detector providing two simultaneous chromatograms from a single run. The PID selectively responds to aromatic and unsaturated hydrocarbons in the presence of alkanes and saturated hydrocarbons. The second detector is used to further differentiate and identify compounds with specific heteroatoms.

If you're on the market for a tandem detector, experience the convenience and flexibility of the OI Analytcal 4450 Tandem Photoionization Detector/Flame Ionization Detector (PID/FID) -- a patented combination gas chromatography (GC) detector incorporating the Model 4430 PID and Model 4410 FlD.