It looks like you are coming from United States, but the current site you have selected to visit is Oman. Do you want to change sites?

In February 2014, a large sinkhole opened up beneath the National Corvette Museum and swallowed $1 million worth of classic cars. Researchers used Xylem’s EXO water-monitoring technology to study the sinkhole and ensure the surrounding buildings were safe.

At 5:38 a.m. the morning of February 12, 2014, security cameras registered a strange movement at the National Corvette Museum in Bowling Green, Kentucky. The grainy footage shows a half-dozen sports cars appear to settle just slightly in the dim light. Then within one minute, eight classic Corvettes disappeared into the earth.

The collapsed cave left a yawning hole, 12 by 18 meters across and 9 meters (30 feet) deep, in the center of the museum’s atrium. In geologic terms, it was just one more sinkhole among hundreds in Kentucky’s Warren County. The region sits atop karst, an eroded limestone formation riddled with ever-expanding caves and channels. 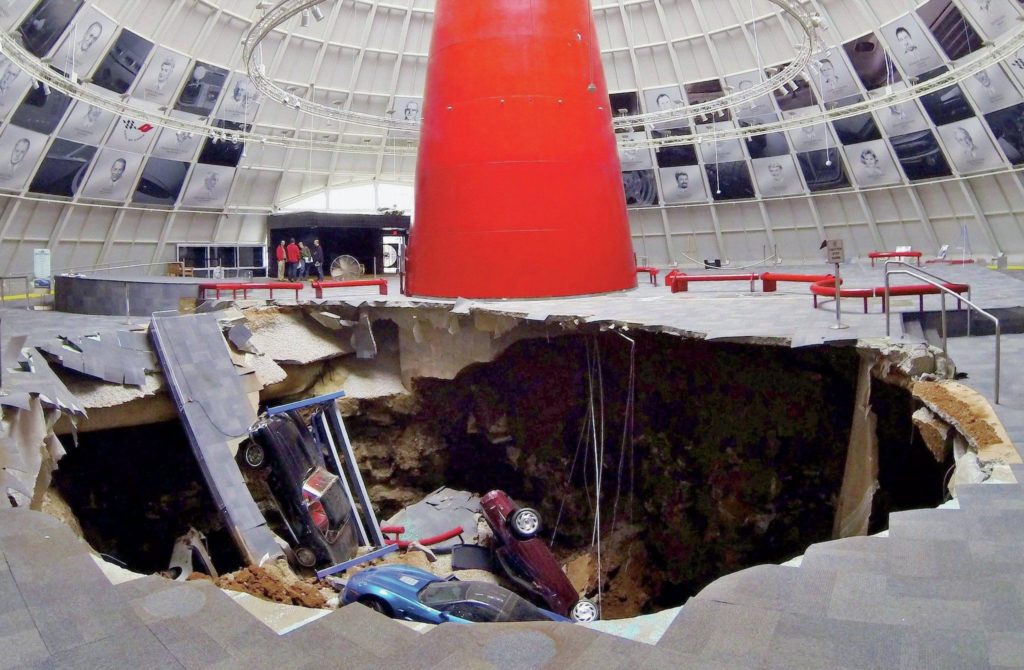 But instead of becoming just another farm pond, weedy pit or temporary road hazard, the National Corvette Museum sinkhole became global news – and a prime opportunity to learn and teach about the karst geography that the city is built upon.

Karst forms when water that is slightly acidic carves tunnels and caves through soluble rock. This makes karst formations look like Swiss cheese or bubble-riddled pizza crust. Most people don’t think much about karst landscapes, though 25 percent of the world’s population lives on top of them.

“Most sinkholes take thousands of years to form,” notes Jason Polk, associate professor of geosciences at Western Kentucky University in Bowling Green, and a global authority on sinkholes.

“At the National Corvette Museum, we could see that there was just a few feet of distance between the concrete floor and the roof of the cave. The cave ceiling had migrated upward over hundreds or thousands of years. Little by little, water continues to move. Storms can undermine the system because rain continues to erode away the ceiling.”

Heavy rains and deep freezes in February 2014 created the perfect conditions to break the cave ceiling lying beneath the museum’s car collection.

The day of the collapse, Jason Polk and a team of his graduate students and colleagues found themselves in the museum’s Skydome, peering into the sinkhole. A WKU engineering student piloted a drone into the hole, using a camera on board to help spot buried Corvettes and look for signs of an underground river that could have caused the collapse.

Meanwhile, Polk and his team went to an old sinkhole on the museum’s property, used as a retention pond for drainage from the building and parking lot. There they looked for data about what caused the collapse and to see if other buildings were at risk.

Monitoring water runoff from the museum

Their key tool was an EXO multiparameter water quality sonde from YSI, a Xylem brand. Logging measurements of water turbidity, specific conductance, pH, temperature and level every 10 minutes, the monitoring sonde was Polk’s eyes and ears as he searched for indications that the old pond and the new sinkhole could be connected.

He and his team also monitored whether runoff from the museum was making its way to the pond or undermining other areas or buildings.

While crews at the museum were drilling foundation structures and filling the sinkhole, turbidity and level were the key parameters on Polk’s mind. A spike in turbidity could indicate that sediment-enriched drilling water was flowing from the museum sinkhole into the pond, or that other water was somehow making the trip. That would have raised a huge red flag, indicating that a blowout or further collapse could be imminent.

Throughout the rainy spring, level and water quality readings in the pond showed that gutter and parking lot runoff indeed drained straight into the retention pond, but no other sources of water seemed to be flowing into the depression. That was very good news.

A new exhibit and continued research

Following the repair of the sinkhole, the National Corvette Museum is more popular than ever. It opened a new Corvette Cave-In exhibit that includes interactive displays, exhibits of the restored and wrecked cars, and detailed information on karst geography and sinkholes.

With the water quality monitoring at the museum complete, Polk and his team continue to study the water running through the karst formation beneath Bowling Green. Their data is posted to a website and mobile app for easy access by scientists, city officials and the public.

Through the website, Under Bowling Green, the team educates residents about the connections between houses and roads on the surface and caves and sinkholes underground.

Read the full story in the latest issue of Mission: Water