Located in northern Italy, beautiful Lake Garda is the largest lake in the country and a popular vacation destination. A new solution from Xylem has been installed at the area’s Peschiera del Garda treatment plant, including a Leopold filter and a Wedeco UV system. The system will lower energy use and provide water that can be safely used in agriculture downstream.

The Peschiera del Garda treatment plant was faced with a number of challenges. Located on the southern end of Lake Garda, the plant is responsible for treating all of the sewage in the area. Most of the year, the plant serves a resident population of 150,000 people, but in the summer this increases to 330,000 people. This means that during warm weather the plant is operating at maximum capacity. 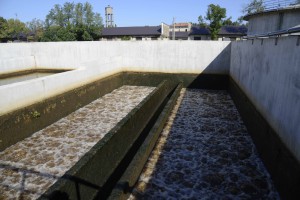 In order to meet the demands of the population, the Peschiera del Garda treatment plant recently decided to install a new sand filtration system. Xylem was chosen to create a filter bed, with sand ranging in diameter between 1.3 and 2 mm, optimized to capture particles that escaped previous treatments. The filtration takes place in eight tanks with a total area of 560 square meters.

The underdrain system also enables a longer operating cycle with less loss of sand. It was quickly installed at the plant and will be able to operate for 25 years without the need for significant maintenance or replacement of components. During periods of high load, the backwashing process can also be alternated in different pools so the system can filter sewage without any interruption.

After removing suspended solids, the treatment process is completed by disinfection. This breaks down the bacteria – particularly E. coli – that survived previous treatments steps. In the past, the wastewater plant used hypochlorite, which was very expensive and added chemicals to the water that could be harmful if it was reused for agriculture.

The plant, therefore, decided to invest in one of the most effective technologies today: UV disinfection. The solution is not only effective in breaking down bacteria, but its lower energy use also lowers costs. A Wedeco TAK 55 UV disinfection system was installed at the plant, using 168 Ecoray lamps.

The Wedeco system also comes with an automated control system to optimize the intensity of the lamps based on the quality of the water. This helps lower energy consumption while ensuring that regulations for bacteria our met. Since installing the Wedeco UV system, the plant has even reached levels below the legal limits.