The Glina wastewater treatment plant in Bucharest was having trouble with an inefficient aeration system that was leading to costly maintenance. Xylem’s new Sanitaire aeration system provides consistent aeration while reducing energy. Learn about the solution.

As the largest wastewater plant in Romania, the Glina treatment plant has a capacity of 1.3 million population equivalent (PE). The plant treats approximately 600,000 m3 of wastewater per day, of which about 400,000 m3 goes through biological and tertiary treatment. Recently the plant had been having trouble with its aeration.

Apa Nova, the operator of the Glina plant, had been using a disc diffuser aeration system in all of their tanks that was unreliable and inefficient. Membrane failures in this system led to costly maintenance, and the treatment was insufficient. In some case they could not reach the required water quality. Other problems they noted with the system included:

– Damage to the diffuser membranes and manifolds.

– Irregular and insufficient aeration of the entire tank.

– Inefficiency in reducing NH4 at a flow of five m3/second.

The company wanted a more reliable system, with less maintenance costs and less energy consumption, in order to optimize the plant’s operations. 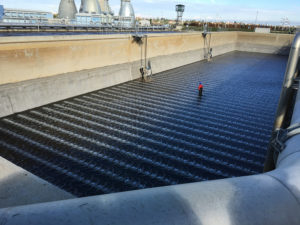 Xylem was called in to measure the current system and understand the needs of the plant. Xylem offered a full Sanitaire aeration system for all of the plant’s 12 basins. Installation of the system began in 2015, and currently the system has been installed in seven tanks. The final tank will be installed in 2019.

The results: lower energy use and consistent aeration

During the first half of 2016, the plant operated only one basin with Sanitaire aeration and 11 basins with the previous system. The total power consumption of the blowers between January and July was 44,000 kWh. In the same period in 2017 (January – July), the plant operated with seven Sanitaire basins and five with the previous system, and the energy consumption dropped to 42,000 kWh.

The plant operators have noted a number of other benefits with the Sanitaire system. They can now reach a set oxygen point in a relatively short time, and they can decrease the NH4 concentration faster. The new system also provides consistent aeration of the entire surface of the tank, and the diffusers can be cleaned with formic acid, which makes maintenance easy.