Xylem has won a contract to provide specialized mixers for the Panama Canal expansion project. The enormous project will allow larger ships to pass through the canal on a new third lane of traffic. Xylem will supply 64 Flygt 4600 series compact mixers that will prevent corrosive sediments from building up on the gates of the locks.

The Panama Canal Authority began the expansion project in 2007, with an estimated cost of $5.2 billion. The project involves constructing a new set of locks, dredging existing channels and building a new access channel on the Pacific side. After its completion, the canal will be able to accommodate wider and longer “post-Panamax” ships, which are mainly used on longer routes.

A major feature of the project is 16 rolling gates for the locks, eight of which were installed on the Atlantic side and eight on the Pacific side. The gates are 56 meters in length, up to 30 meters in height and 10 meters wide. Each gate weighs up to 4,000 tons.

These gates and ancillary structures were fabricated by Cimolai in Italy (Pordenone) and delivered by ship to Panama. Xylem will supply 64 Flygt 4600 series compact mixers, which will ensure that corrosive sediments do not build up on the gates. Xylem’s solution will deliver superior mixing performance to this challenging application.

“We have significant experience developing specialized solutions for complex applications such as this,” says Marco Leoncavallo, Treatment Market Manager for Xylem. “We have incorporated similar Flygt technology to what we are using here in comparably demanding applications involving drilling mud, or bentonite homogenization tanks in the oil industry.”

The final gate was installed at the end of April 2015, and The Panama Canal Authority says that the expansion project is now 88 percent complete. The new third set of locks is expected to become operational in 2016. 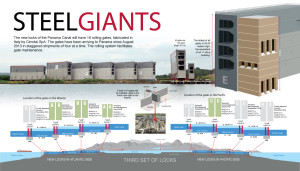