It looks like you are coming from United States, but the current site you have selected to visit is Libya. Do you want to change sites? 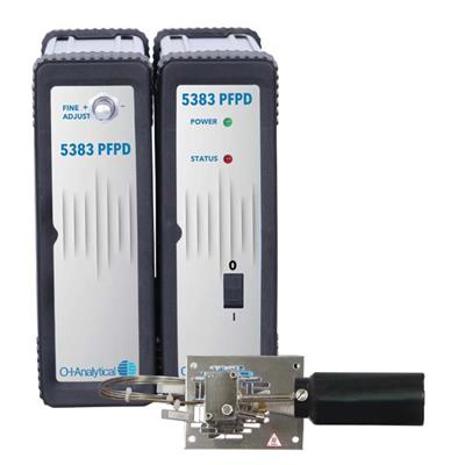 The superior sensitivity of the OI Analytical 5383 PFPD makes it the instrument of choice for the analysis of sulfur, phosphorus, and other elements. Its linear, equimolar response to sulfur allows selective measurement of individual sulfur species from low ppb to ppm levels, and total sulfur as the sum of individual peaks. The unique capability to obtain simultaneous sulfur and hydrocarbon chromatograms from a single PFPD detector sets it apart from other sulfur detection technologies.

Compact and modular, the new, second-generation 5383 Pulsed Flame Photometric GC Detector (PFPD) offers greater ease of use, design flexibility, and analytical refinement than its predecessor, while retaining the proven technology features that laboratories around the world rely on for accurate results.

With a significant improvement in the signal processing and a 10-fold increase in sensitivity over most traditional FPDs, the detector makes accurate analysis of sulfur, phosphorus, and other elements easier than ever before. The intuitive, easy-to-use software suite with integrated monitoring and analysis capabilities provides a powerful tool for parameter optimization, data analysis, and more. Reliable and cost-effective, the 5383 PFPD uses significantly less gas than SCDs or FPDs and requires considerably less maintenance.