It looks like you are coming from United States, but the current site you have selected to visit is Libya. Do you want to change sites?

Perry Alagappan’s interest in science began at an early age, and like with many children, it started with dinosaurs. As a young boy in Texas, he visited the Houston Museum of Natural Science many times. Today, at 17, his interest has grown from dinosaurs to carbon nanotubes, and research that recently won him the Stockholm Junior Water Prize.

“Initially I went to see the dinosaurs at the museum, but later I looked at all of the exhibits,” says Alagappan. “That is what sparked it for me, the idea of exploring the unknown, that through science you can experiment and discover solutions you hadn’t thought of before.”

With both of his parents working as engineers, it was perhaps not unusual that Alagappan started researching carbon nanotubes already in the 9thgrade.

“Carbon nanotubes, which are incredibly small tubes made of carbon, have really unique properties,” he says. “They are as strong as steel at the nano-level. The tubes can be used in a variety of ways, from tissue engineering to mechanical engineering. They have a very promising future.”

Alagappan got the idea for his award-winning research project on a trip to India.

“In India I was looking for inspiration on a water purification project. I saw there for the first time the challenges of water purification, of how difficult it is to remove pollutants from water,” he says. “We might not realize it in developed countries, where you can just turn on the tap, but providing clean water is a huge issue, and it will become an even bigger problem in 10-20 years. I realized after the trip that carbon nanotubes could be part of the solution.”

Alagappan spent two years researching and building his solution at the lab of Professor Andrew R. Barron at Rice University. “The members of the Barron Lab were very helpful in providing guidance and feedback throughout the project,” Alagappan says. “The development of the filter certainly wouldn’t have been possible without them!”

After his research and experimentation, Alagappan was able to develop a renewable filter that uses carbon nanotubes to remove toxic heavy metals from water.

“Currently there is a lot of technology to remove heavy metals from water, but the problem is that when the filters are disposed of the heavy metals go back into the environment,” he says. “With a renewable filter, you can extract the metal, reuse it in electronic applications, and keep using the filter.”

Alagappan’s filter can remove over 99 percent of heavy metal contaminants from drinking and industrial wastewater.

In August, Alagappan’s project won the Stockholm Junior Water Prize, in competition with finalists from around the world.

“It feels incredible to win, everyone has been so wonderful,” he says. “I’ve been happy to meet all the other scientists from other countries, they have amazing projects.”

After winning the prize, Alagappan and the finalists toured the offices of Xylem, which has sponsored the award since it began. 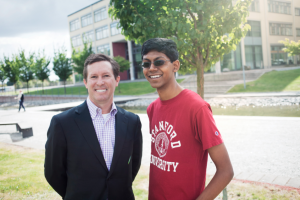 “We saw all of the pump technology and filtration systems, it was really interesting to see Xylem’s innovative approach to solving big issues,” he says. “I was really impressed with the Xylem Watermark program and how the company is giving back to the community.”

Alagappan has now started at Stanford University, where he will study engineering. He is also working on a publication about his research.

“I would like to share my solution as an open-source technology, so that others can learn more about it and build on it,” he says. “Working with something that can help so many people and have a big impact has been really empowering.”