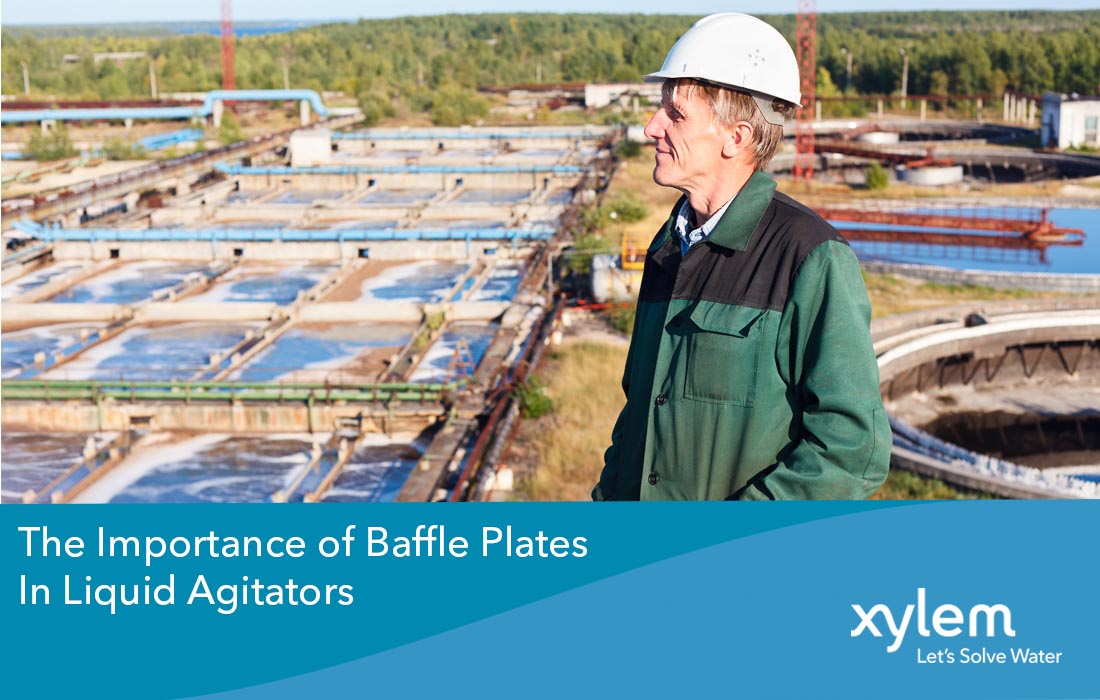 Use baffle plates to gain more controlled agitation, extend the life of the agitator and create peace of mind for the operator.

Xylem’s top-entry agitators rotate in a clockwise direction (when looking from above the tank). Without interference, tangential velocities from the impeller(s) would typically cause the entire fluid mass in the tank to spin as a whole, with very little actual mixing taking place. It may look like good mixing, but seeing the fluid vortex all the way down to the impeller is deceiving. The reality is that very little shear is being produced. The particles are actually just spinning around more like in a centrifuge than a mixer (see Figure 1).

Baffle plates are long, flat plates mounted to the interior of a mixing tank such that they protrude inward toward the center of the tank to disturb the swirling fluid. They also force the liquid to move upward along the tank wall. Both actions improve mixing, and therefore the agitation process, by creating a “controlled chaos” of turbulences. It is not possible to load a mixer’s impellers properly, especially in low viscosity liquids, without baffles due to the spinning of the liquid and the lack of top-to-bottom movement. Baffle plates control the liquid more, from the top to the bottom of the tank, resulting in better mixing (see Figure 2).

Without baffle plates sludge, especially with low viscosity fluids, will turn at the same speed as the agitator shaft. The shaft will eventually find the most suitable position using the “law of least resistance”, and begin to turn out of the center line. This will stress the agitator’s support bridge and the shaft will eventually begin making an oval turn. This in turn will fatigue the shaft, risking premature breakdowns.

The graph below (Figure 3) shows the relation of the width of the baffle plate to liquid viscosity. The distance from the wall is normally T/72 but not less than 50mm.
In cylindrical tanks the baffles should be evenly spaced. The number of baffles needed depends on liquid characteristics, the degree of agitation (Reynolds number) desired, and the volume of the tank. Typically, four baffle plates are used but the number can vary due to the degree of agitation required.

For a low degree of agitation, such as in a digester chamber, two baffles can be sufficient (see Figure 4). When axial flow down-pumping impellers are used, a cross baffle (comprised of two plates that cross) mounted near the base may be all that is needed (see Figure 5). Note that cross baffles should not be placed at the very bottom of the tank to prevent solids from accumulating there. 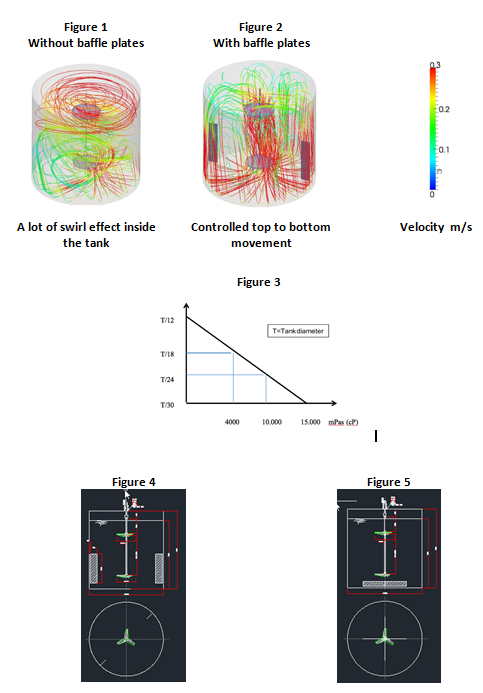