New technology and huge amounts of data are changing how water utilities operate. Impeller spoke with Colin Walsby, Vice President of Strategic Solution Development at Xylem’s Sensus business, to learn how utilities are adapting and what opportunities lie ahead.

Sensus provides smart solutions for cities and utilities, including metering, billing, data hosting and communications networks. Walsby recently led a roundtable discussion at the American Water Summit on the theme of the digital utility.

What is the American Water Summit and who participated? 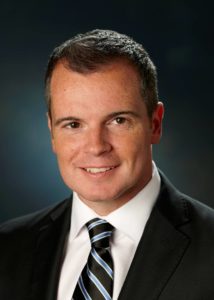 The American Water Summit is a conference that presents the latest topics and trends in the water industry. I was particularly impressed that this year’s event in Miami drew a solid mix of vendors – such as Sensus and Xylem – and utilities, cities and municipalities. This year’s focus was the digitalization of the industry. There has been a lot of buzz about the topic. People are now really starting to look at what it means for water utilities and how they will adapt to the trend.

What does digitalization mean for utilities?

What’s interesting about digitalization for water utilities is that it really means something different to everybody. I would say that a lot of utilities are very early on in their digitalization journey. They are putting out more and more sensors, including meters. Their cost of communications is reducing, and they are getting much more data back from those sensors. Managing all of that data, and doing something with it, is one of the big issues.

Take Sensus as an example. In North America, we have more than 20 million smart points installed that use our FlexNet communication network. A smart point is basically something that is connected to a meter and that transmits data. In the past, those devices were often read by a utility employee driving by in a truck once every month. For instance, if you had five million points, a utility in the past would collect data on them once a month, for a total of 60 million data points for the year.

With digitalization, we are now transmitting hourly data back to utilities. So 60 million data points per year has become 120 million points per day, 3.6 billion per month, and 43 billion per year. Many utilities are trying to understand how they are going to deal with this ever-increasing data, and how it can drive improvements and efficiencies in the way they serve their customers.

Your roundtable at the American Water Summit focused on billing and metering. What did you discuss there?

The topic was billing and metering, but it was also a catalyst to talk about a lot of ways that digitalization is affecting utilities. Once utilities start to use data analytics, there are many benefits to be had.  For example, one utility said that after they started using data analytics as part of their business, they realized that 10 percent of their accounts were not billed. There was a disconnect between their reading system and the billing system, which was only visible through smart analysis of the data.

Improving customer service was also a big discussion point, now that utilities have access to all this data. For example, utilities in California are interested in having people use less water. Now that they have regular, hourly data, they could provide portals and apps to their customers where they monitor their consumption and compare it with others in their neighborhood or a similar economic sector.

Is digitalization changing how people work in utilities?

At the summit we saw that there were several participants from the city of Atlanta, coming from different departments. They understand that there are multiple people in their organization who can use the data they are getting to drive their own business intelligence systems. Whether it is people responsible for meter reading, asset management or customer service, they all have a need for this data.

I think there’s a cultural shift going on in utilities as people become more comfortable with technology and how data enables them to conduct business in new ways. I have worked in the water industry for more than 20 years, and I can say that probably more has happened in this industry in the last five years than in the previous 15.

How are water utilities managing all this new data?

In the past, a small utility would use their data to generate a bill, and keep the data for a couple of years. Today, utilities want to keep all of the data because it enables them to do new things. For example, if a customer calls about a high bill, the saved data is now a history that you can refer to. You can say to them, “I can see from your consumption pattern that something has changed. Did you get a swimming pool, or maybe you have a leak?”

The challenge for small utilities is that they don’t have the resources to deal with all their data. They need companies who can take that data and validate it, analyze it and store it. This is where Sensus and Xylem can really help and be leaders. Sensus hosts and processes the data of about 600 utilities and municipalities in North America. I think we’ll see more of this arrangement as the need for data increases.

This kind of data management also helps utilities become more proactive. We have utilities who are now monitoring leakage. Previously it would take two to three billing cycles for a customer to realize they have a leak in a pipe. A utility can now see this in one or two days. They can proactively call customers and say, “Look, we want you to know there is a potential leak in your property, and it is costing you X dollars per day.”

This data history also lays the groundwork for predictive analytics, such as predicting that a pipe is going to fail in the next three to six months. In this way, digitalization for utilities is about how they can deal with their problems today, and how they can plan for their future. Xylem and Sensus are well positioned to help them with this effort.

Since Xylem recently acquired Sensus, how do you see the two operations working together?

Whether it is clean water or wastewater, or billing or metering, utilities are starting to think across their businesses. They will be looking for companies that provide solutions that match their aspirations. Together, we will be one of the few companies, particularly in the water industry, that can offer a wide range of solutions that match where utilities are now – or where they want to be in the future.

A lot of what we are trying to do is get to a point where utilities can manage their assets more efficiently. For example, it costs utilities money and energy to keep their water distribution networks pressurized and full at all times. However, if utilities can add their pumps and other equipment to our communication network, they can combine that data with metering data to make smarter decisions about water supply.