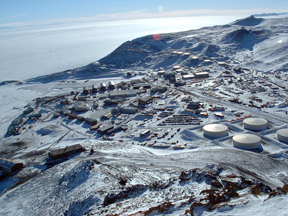 Life in Antarctica
Imagine a whole world covered in ice and snow: ice on the mountains, ice capping the sea, ice tumbling off the cliffs, whole caves and hills made of ice, ice crunching under your feet, and ice crystals glittering on your eyelashes. On top of that, imagine zero- humidity with temperatures of minus 100 degrees Fahrenheit and you have an idea of what it’s like to be Mike Byrnes of Raytheon Polar Services, who for three years was a boiler mechanic at McMurdo Station, Antarctica.

McMurdo Station serves as the logistic hub for much of the U.S. Antarctic Program. All resupply flights to South Pole originate in McMurdo, and numerous temporary inland and coastal stations are supported by the McMurdo logistic infrastructure. In summertime, which is the Northern Hemisphere’s winter, there are approximately 1,000 to 1,200 people working at the station. In the winter season – Southern Hemisphere’s winter – season starts mid-February and runs through mid-October, there are approximately 150 to 200 people at the station.

With nearly 20 years as a licensed boiler mechanic in Montana, California, along with a four-year stint in the Navy, Mike saw McMurdo as a challenge and experience. He was hired in the 2008 winter season at McMurdo as its boiler mechanic with primary focus on the hydronic heating system.

“I’m from Montana, western Montana. I went to college on the Northern Tier where it regularly got to 30 and 40 below zero.  But, Antarctica is much colder, but it’s a dry cold, so the joke goes. A good day at McMurdo is a day that the wind is not blowing,” laughed Byrnes.

Keeping it Warm and Even Cold

According to Byrnes, the engineers that designed the McMurdo hydronic heating system specified Bell & Gossett pumps. The whole hydronic heating system at McMurdo station covers the breadth and width of the town. Power to the system is supported by five CAT generators in the power plant, which recovers all the waste heat (heat off the engine water jackets and the stack gas recovery) and pumps the hot glycol to buildings throughout town as the primary heat source using Bell & Gossett pumps (30 horse to 50 horsepower) with expansion tanks.

The waste heat system included a flat plate heat exchanger where heat was transferred into the building loop. From there glycol was pumped throughout the building loop and into secondary and tertiary loops inside of the building by smaller fractional horsepower Bell & Gossett pumps and then through the boilers that were in the building for backup, in case the main waste heat system did not provide enough.  The bigger dorms had six fractional 1/12th horsepower Bell & Gossett pumps to circulate the glycol, to help boost each floor loop.

“I’ve had great luck working with Bell & Gossett products. We had 78 boilers in 21 different buildings at McMurdo and in excess of 200 pumps, such as the B&G 1510, that I maintained. Luckily, I was able to keep up with all of the maintenance by myself because I could get any tech manual or parts or exploded parts list that I needed for any model pump made by Bell & Gossett, added Byrnes.

Amazingly, even with the frigid temperatures in the wintertime, many of the buildings at McMurdo require cooling air. The buildings generate enough heat that very little is required to keep them warm and actually, many need to be cooled. This is because many of the buildings house a large amount of electronics. While no air conditioning is used in the buildings, outside air is mixed into the airstream to cool it down, and then it gets recycled.

Byrnes didn’t know the exact number or figure that would quantify the amount of energy saved, but he indicated that by pumping the waste heat around, being able to utilize it in all the outlying buildings, and not running boilers in several of the buildings due to efficiency, the fuel-savings alone was astronomical.

“All kinds of opportunities for learning all kinds of things. There’s just a myriad of opportunities. Summer and winter, each season has its own benefit and detriments, of course, but it’s always a good thing. I would recommend going to McMurdo to anyone – at least once. It’s an adventure of a lifetime,” Byrnes said.