Albion completed the update of several components of its four-MGD plant in the fall 2017. Afterwards, plant superintendent Kent Phillips became interested in testing the impact that optimizing his mixing might have on other aspects of his conventional activated sludge process with enhanced biological phosphorus removal.

The 4220 comes in 1.5-, 2-, 3-, and 4-horsepower models. A four-horsepower mixer can operate at any lower power level and perform with the same high efficiency as a lower power model. The old mixer was drawing 1.3kW. In the end, Phillips found he could turn the 4220 all the way down to 0.1 kW–eight percent of what the old mixer used–and still have satisfactory mixing. 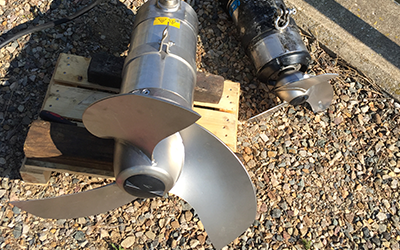