When Legionnaire’s disease broke out in Warstein, Germany, more than 150 people were infected and two people died. Xylem was brought in to install a Wedeco ultraviolet system in the city’s municipal wastewater treatment plant, which quickly ended the outbreak.

In late summer 2013, hospitals in the German city of Warstein began seeing a surge of patients with Legionnaire’s disease. The disease is a potentially fatal form of pneumonia contracted by breathing in small droplets of water contaminated with the legionella bacterium.

In an attempt to stop the frightening and fast-escalating outbreak, city officials and environmental regulators immediately turned their attention to Warstein’s wastewater pathway. 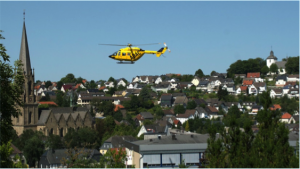 The legionella pneumophila bacteria thrive in stagnant water, and the first target was an industrial cooling tower that showed traces of the bacteria. The tower was shut down, but the parade to the emergency rooms didn’t slow down. Attention quickly turned further upstream to a local wastewater treatment plant. Sure enough, the wastewater plant was emitting water with high levels of legionella into the same river that serves as a source of water for the industrial cooling tower and authorities moved it to the top of the “suspect list.”

“Help us find a solution fast”

One call came from consultants, enlisted by regional regulators to help find a solution, who had had worked previously with the Herford team on solutions for reducing pharmaceuticals and other micro-pollutants in wastewater treatment plant emissions.  A second call came directly from the company that operated the Warstein wastewater treatment plant.

“They were simple and urgent requests: help us find a treatment solution very fast,” says Achim Ried, Chief Engineer for Xylem Treatment Solutions. “We had just a little information about the water matrix and the level of legionella in the water, so we did a quick estimation and looked for a system that would be available right away.”

The Xylem team knew UV was the way to go. It’s a proven technology for disinfecting water and wastewater. Ultraviolet light directed at the water deactivates viruses and bacteria – including legionella – by physically damaging their DNA.

Installation in less than a day

Within the hour, the team located a Wedeco LBX 1000 UV system in its Herford test site and pulled together a crew of experienced service technicians to deliver and install the system. By this time, the Warstein outbreak had become world news, and the pressure was on to find a fast fix. 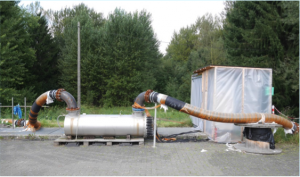 “Usually, it would take weeks to find the right system for the situation and then get it ordered, delivered and installed,” says Sven Baldig, managing director of Xylem Services for the Wedeco brand.  “But this was a case where quick action was vital, and we responded to the acute needs of the city.”

In less than one day – cooperating closely with the wastewater treatment plant operators and communicating with one another constantly – the Xylem business team and service team in Herford had the system in place, with all the water piping and all the electrical connections complete.

Since this quick fix in early September, there have been no more reported cases of Legionnaire’s disease in Warstein. The fast installation of ultraviolet systems from Xylem helped keep this dangerous outbreak from doing even more damage.