It looks like you are coming from United States, but the current site you have selected to visit is Kenya. Do you want to change site?

Patricia Mulroy learned a long time ago that when you are in charge of supplying water to nearly two million people living in the desert, never plan for the best-case scenario. As head of the Las Vegas Valley Water District and the Southern Nevada Water Authority, Mulroy has dramatically changed how the region uses water – but she is planning for even tougher times ahead.

It sounds like an impossible task: supply water to two million residents and 35 million annual visitors in one of the hottest, driest cities in the world, during a population boom and a drought, and with a shrinking lake as the only source of water. Yet Patricia Mulroy has done just that for Las Vegas. She has done it by cooperating with other regions about water supplies, by providing incentives for residents to use less water, by charging high-volume users more, and, most importantly, by never playing the odds.

Las Vegas draws most of its water from Lake Mead and the Colorado River basin, a supply it has long shared with other southwestern cities. The lake was full when Mulroy joined the Las Vegas Valley Water District in 1985, but Nevada was already hurtling toward the limits of its 300,000 acre-foot Colorado River allocation and experiencing staggering growth.

“The water community in this country plays this lovely game of probabilities, and probabilities are developed by looking in the rearview mirror,” Mulroy says. “Whether it was the federal government or the state, every time we turned around everybody was saying ‘your water supply will last you until at least 2025.’ We were going to run out in 1995 unless we made some fundamental changes.”

A regional plan and a wake-up call

Federal rules limit the amount of water Las Vegas can draw from the Lake Mead and the Colorado River each year. In response to those legal limits, in 1991 Mulroy helped create the pioneering Southern Nevada Water Authority.

At the time each municipality independently sought water contracts from the river, which discouraged conservation. Mulroy recognized a need to pool resources and adopt community-wide water efficiency measures in order for the region to continue accommodating new residents.

Yet when the Colorado River basin drought hit in the early 2000s, it caught Southern Nevada off-guard.

“We had to really shift course,” Mulroy says. “We had been gradually getting the community accustomed to voluntary conservation for several years and some were starting to embrace it, but it’s a generational issue until you get to a point where people see that they really have to do it.”

From the 22-million-gallon (83-million-liter) Fountains of Bellagio and the Venetian’s artificial canals, to Treasure Island’s pirate lagoon and The Mirage’s liquid volcano, visitors to the Las Vegas Strip might never suspect that the region was hit hard by drought.

Yet today only three percent of the city’s water goes to those massive casinos that drive the state’s economy. Unlike many cities that offer customers a volume discount, Las Vegas actually charges its high-volume users more per gallon.

“The resorts are by nature high-volume users so they recycle virtually every drop,” Mulroy says. “For them it’s a dollars and cents issue, and they’ve made unbelievable strides in being actual leaders. When we started voluntary conservation, we knew business had to lead the way. Residential consumers are not going to change their lifestyle in order to accommodate businesses that are doing nothing.”

An active conservation coalition comprised of large companies throughout Las Vegas has advanced the efforts.

“The hotels are tripping over each other to be the most conserving and most sustainable,” Mulroy says. “Businesses have been awesome. They’ve really pushed this forward.” Incentivizing property owners to replace their lawns with water-efficient desert landscaping has been a cornerstone of Mulroy’s campaign since 2003.

More than 40,000 valley properties have taken advantage of the program, which pays $1.50 per square foot and is saving more than 8 billion gallons of water annually.

“We’ve sent almost $200 million in direct rebates to our customers to take grass out,” Mulroy says. “We were using well over 70 percent of our water outside. Outside changes were the only way we could conserve and really make a hit into our water consumption.”

As a companion piece to the rebate program, no new homes in Las Vegas are allowed to have front lawns and only 50 percent of landscapable area in backyards can be grass. It’s illegal to let a sprinkler spray on cement.

The agency also puts everyone who lives in the valley on a watering schedule – once weekly during winter months, three assigned days a week during the fall and spring and no watering between 11 a.m. and 7 p.m. during the hottest summer months.

“From a cultural standpoint, that was probably the hardest thing for people to get their heads around,” Mulroy says. “It took the landscaping a while to get accustomed to it, but it did – trees didn’t die because they were only getting watered once a week – and now it has just become part of Southern Nevada’s culture.”

Golf courses were also put on strict water budgets and residents were charged for their personal use under a tiered rate structure. 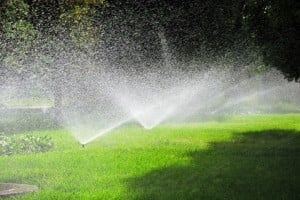 Some Southern Nevada communities are now testing a next-generation technology that detects soil moisture and only activates sprinklers when the soil requires it.

“We think that will actually save us more water than the rigid three days,” Mulroy says. “If the technology works then we’ll allow homes that employ it to not have to live by the watering schedule, and the technology will self-regulate.”

Preparing for the worst

The authority’s conservation efforts have so far postponed a possible need to import water from distant rural areas, but Mulroy applied for water rights in basins in Nevada and Utah’s Snake Valley as part of a proposed 285-mile pipeline plan to bring drinking water to Las Vegas. Permits for water have been granted in the four Nevada basins while the applications are pending in Snake Valley.

“We have to anticipate the worst,” Mulroy says. “The severity of the droughts in the Colorado River basin is going to get deeper and deeper. We could easily face having to replace a third or more of our water supply if need gets that strained. We’ve got any number of agreements between us in the lower basin where we move water around and we’re banking water in Arizona and California, but all of that won’t be enough. You plan for the worst and if it gets that bad, the only viable alternative for us is to bring unused perennial yield groundwater from outside into our basin. We won’t have a choice.

“It’s not popular, but there will come a day of reckoning,” she continues. “Our only objective at this point is to preserve it as an option, because you won’t have the time to do the permitting and environmental work later. Then it can sit there until conditions get so bad that there’s no choice but to bring in that supply.”

The authority’s efforts have made a major impact on average water use per person, which continues to drop year after year. Total water use has risen only slightly despite the population influx.

“It’s been a journey, but it has allowed us to cut our water use by over a third, and get our residential water footprint down to 75 gallons per person per day, which is a huge improvement from where we were,” Mulroy says. “It’s a matter of being conscious of it. People never even thought about their water in this town. It was a given that it would be here. It wasn’t until Lake Mead started to drop, and drop, and drop – and the reality set in that maybe climate change isn’t a religious argument but something that is manifesting itself faster than we’re institutionally able to make adaptive changes to – that people began to think about it differently.”