It looks like you are coming from United States, but the current site you have selected to visit is Kenya. Do you want to change site?

Filmmaker Sean Casey, famous for driving a custom-built vehicle into the middle of a tornado, is working on a new IMAX movie called Extreme Weather 3D. The National Geographic movie will use data collected by SonTek equipment, measuring how much water the melting Dawes Glacier in Alaska is adding to the ocean.

In September 2015, Casey and his team visited Dawes Glacier, where they captured on film a 300-foot-tall piece of ice breaking off into the water. They were protected from flying chunks of ice by a specially designed armored boat.

“The earth’s ice is melting quite quickly and it’s ramping up,” Casey said in a recent video interview with ABC 10 News in San Diego. “Eighty percent of the world’s population lives along oceans. As these oceans rise, it’s going to change the very fabric of how those cities, how those people exist.” 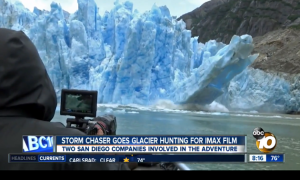 As part of the project, SonTek Application Engineer Kevin Labbe joined the IMAX crew in Alaska to train researchers from the University of Fairbanks on how to collect the data needed for the film. The researchers will measure the amount of ice and water that is being ejected from the glacier, how fast the glacier is melting, and how much water the glacier is adding to the ocean.

To measure the data from the glacier, the scientists will use a combined solution from SonTek, a Xylem brand, and Seafloor Systems. SonTek’s equipment includes a HydroSurveyor system with the CastAway-CTD, designed to collect bathymetric data (on underwater depth), and data on conductivity and temperature.

Seafloor Systems provided a HyDrone-RCV system, a remotely controlled vessel that will carry the SonTek solution. The vessel was designed to survey in uncertain environmental conditions. Two integrated HyDrone catamaran platform systems were shipped to Sean Casey for filming at the glacier.

Getting up close to nature at its most dangerous is nothing new to Sean Casey. For the Discovery Channel’s Storm Chasers, he developed the Tornado Intercept Vehicle. This heavily armored vehicle weighs 16,000 pounds (7,257 kilos) and includes anchor spikes to keep it stable. In 2013, Casey put the second version of his vehicle to the test inside a massive Kansas tornado.

Casey’s new film, Extreme Weather 3D, is expected to be released in August 2016.