A devastating earthquake in 2013 in Lushan County injured nearly 12,000 people and collapsed many buildings. During the intensive reconstruction work, a Flygt TOP integrated pump station was selected to serve a scenic area for tourists in the ancient city of Han Jiang.

On April 20, 2013, the remote county of Lushan made nationwide news when it was hit by a 7.0-magnitude earthquake. Following the disaster, local and national government leaders made it a top priority to rebuild the county, located in west Sichuan.

Xi Jinping, the President and Chairman of China, visited Lushan with Zhang Gaoli, the Vice-Premier of the State Council, to give their condolences and support the earthquake relief work. A plan was made to reconstruct the area as quickly as possible.

The local Lushan government began the construction of a new, picturesque Lushan focused on tourism. This project involved new infrastructure and a mission to rebuild confidence in the earthquake-stricken area and its neighboring tourist attractions.

Challenge: Rapidly build a pump station in the scenic area

Once they learned about the reconstruction project, Xylem sales engineers quickly contacted the client and traveled to Lushan for a face-to-face discussion. The local government needed to build a sewage pump station in the newly built scenic area as soon as possible. Xylem’s engineers recommended the best solution, a Flygt TOP integrated pump station.

One advantage of an integrated pump station is that most of its structure is prefabricated, which shortens construction times and guarantees project quality. This avoids the long planning and construction cycles of traditional pump stations.

In addition, there is no need to build a pump room as the cylinder is completely buried underground, so it integrates perfectly with its surroundings. The Flygt TOP integrated pump station can also operate unattended thanks to its advanced automation technology that minimizes the need for maintenance.

Post-disaster reconstruction of Lushan was a top priority, which meant that engineering and infrastructure operations were carried out under tight schedules. Xylem needed to not only deliver the highest project quality, but also deliver the product to the site within four weeks of signing the contract. Thanks to the joint efforts of the sales team, technical engineers and the factory, the delivery was made ahead of schedule.

Delivering the solution, however, was no simple task. The fiberglass, reinforced plastic cylinder in the pump station measured three meters in diameter and 14 meters in height. Transporting this cylinder on the highways and zigzagging roads of this region, many of which were severely damaged in the earthquake, required careful planning.

Xylem service engineers investigated the route in advance and escorted the product throughout its entire journey. Due to the large size of the cylinder, two cranes were used for hoisting. The construction team on site had conducted repeated training and tests to optimize the hoisting operations.

A successful installation and happy customer 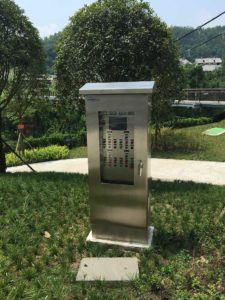 The pump station now delivers wastewater, collected from the ancient Han Jiang city and the surrounding area, through a pipeline buried under a river to a wastewater treatment plant five kilometers away. Aside from a control cabinet that sits on a lawn, the pump station is completely concealed under the pavement.

Manager Li of Sichuan Huaxi, the General Contractor, praised the design concept of the integrated pump station. “Local residents have no idea that a pump station is hidden right under the ground that they are walking on in the scenic area,” he said. “There is no odor and no sounds from the station’s operations.”