Professor Wilfried Brutsaert is awarded the Stockholm Water Prize 2022, for his important contribution to understanding the effects of climate change on our planet. Professor Brutsaert, the Professor Emeritus of Civil and Environmental Engineering at Cornell University, New York, has also been hailed for his pioneering approaches to understanding changes in groundwater storage.

Known as Mr. Evaporation, he is a leading expert on terrestrial evaporation and the author of “Evaporation into the Atmosphere”, considered to be the standard work on the topic. On being awarded the prize, Professor Brutsaert said:

“I am honoured and grateful to receive this award and to have the opportunity to highlight the importance of evaporation and groundwater storage. Although evaporation is a crucial aspect of the water cycle, it is very difficult to measure. By assessing predictions of evaporation on a local level, we can then estimate levels of precipitation and therefore the effects of climate change on our planet.” 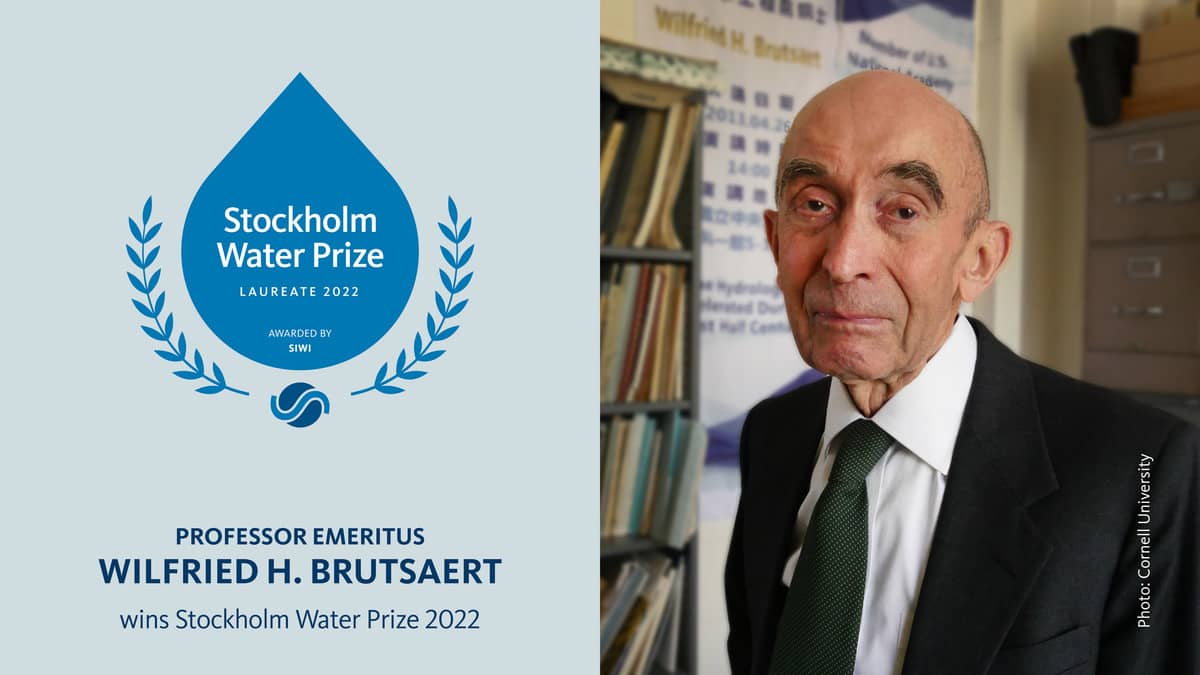 In its citation, the Stockholm Water Prize Nominating Committee said: “Professor Brutsaert is a top hydrologist and a leader in land-atmosphere coupling research. His innovative works on evaporation and hydrology are of lasting theoretical and practical importance, particularly in view of climate change.”

SIWI’s Executive Director Torgny Holmgren commented: “Professor Brutsaert’s theoretical approaches have been instrumental in the development of measuring technologies to assess evaporation. This work is fundamental for both climate modelling and for estimating the effects of climate change on the water cycle.”

In particular, Professor Brutsaert ’s contribution to understanding local terrestrial feedbacks has led to significant breakthroughs, which are especially valuable for communities who rely on predicting the impact of climate change on their water resources. Previously, scientists had found it difficult to make predictions as local terrestrial feedbacks are much harder to estimate.

His work has also pioneered creative methodologies to understanding changes in groundwater storage. In particular, how the water cycle is impacted by global warming and how groundwater is impacted in thawing permafrost regions.

Originally from Ghent, Belgium, Professor Brutsaert studied water and soil engineering before completing a Ph.D. at the University of California, Davis. He has spent over 50 years on the faculty of the Department of Civil and Environmental Engineering at Cornell University, and has also worked in Japan, the Netherlands, Belgium, Switzerland, and China.

The Stockholm Water Prize is awarded by SIWI in cooperation with the Royal Swedish Academy of Sciences and will be presented by His Majesty the King Carl XVI Gustaf of Sweden, during the World Water Week in August.

As part of Xylem’s commitment to solving water and advancing sustainability, the company is a proud partner of SIWI and one of the founders of the Stockholm Water Prize. Xylem is also the founding global sponsor of the Stockholm Junior Water Prize and aims to ignite the next generation of STEM professionals and water stewards to develop innovative solutions to water challenges.

Through Her Eyes: A Q&A with a UNICEF WASH Specialist

The power of partnerships in tackling global water challenges

Partnering to Solve Water in India