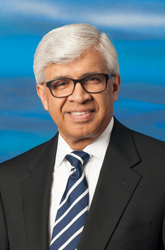 Dr. Mohapatra is the Former Chairman, President and Chief Executive Officer of Quest Diagnostics Incorporated, a leading provider of diagnostic information services. Prior to joining Quest as Senior Vice President and Chief Operating Officer in 1999, Dr. Mohapatra served as Senior Vice President and member of the executive committee of Picker International, now part of Philips Medical Systems, where he served in various executive positions during his 18-year tenure.

Dr. Mohapatra serves as a director on the Board of Leidos Holdings and is a trustee of Rockefeller University. ​He is also an executive-in-residence at Columbia Business School.