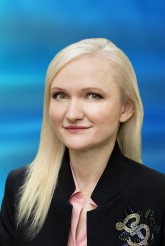 Ms. Tretikov is a Corporate Vice President & Deputy Chief Technology Officer at Microsoft Corporation, and a leading expert on Artificial Intelligence and business transformation. In her role at Microsoft, she applies a cross-disciplinary approach to creating solutions that address some of the world's most challenging problems and empower humanity through technology.

Prior to joining Microsoft in 2018, Ms. Tretikov served as Senior Vice President of Engie SA, a multinational energy company, and Chief Executive Officer and Vice Chairman of the Terrawatt Initiative, a non-profit organization launched by Engie and other multinationals with a mission to alter the Earth's ecology through energy transition to CO2-negative systems. She was previously Chief Executive Officer and Executive Director of The Wikimedia Foundation and Wikipedia Endowment, the non-profit organization that supports Wikipedia.

Ms. Tretikov founded a company in the field of computational genomics while at college and has numerous patents and articles to her name in the field of technology-enabled business transformations. In addition to prior service on the board of a U.S. public company, she currently serves on the boards of a number of private companies.