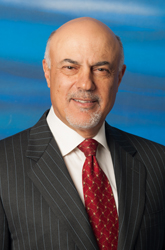 Mr. Tambakeras serves as the Chairman of our board of directors.  He served on the board of ITT Corporation from 2001 until May 2013, Parker Hannifin Corporation from 2005 until October 2011 and Newport Corporation from May 2008 until December 2009. Mr. Tambakeras also served as Chairman of the Board of Directors of Kennametal, Inc. from July 2002 until December 2006. He was also Chairman, President and Chief Executive Officer of Kennametal from July 1999 through December 2005.  Prior to that, he served as the President of the Industrial Controls business of Honeywell International Inc.  Earlier in his career, Mr. Tambakeras held positions of increasing responsibility in several manufacturing companies, including leadership positions in South Africa and the Asia-Pacific region.

Mr. Tambakeras is Chairman of Make-A-Wish International and served as a member of the board of trustees of Loyola Marymount University. He previously served for five years on the President's Manufacturing Council.