The third largest municipality in Canada, the City of Calgary is located in the western province of Alberta. The City operates a water distribution and transmission main network that spans more than 5300 kilometers and serves 1.4 million people. Within this network, over 460 kilometers of pipe are classified as feedermains, ranging from 500 millimeters up to 3 meters in diameter. This network of large-diameter pressure pipe supplies water to pump stations, reservoirs, and distribution mains and is composed primarily of Prestressed Concrete Cylinder Pipe (PCCP), Bar-Wrapped Pipe (BWP), and Steel Pipe.

The City launched its current feedermain inspection program in 2004, following the failure of a 1200-millimeter PCCP feedermain that released more than 20 megalitres of water, flooded roadways, and disrupted service to over 100,000 customers. Since the start of this inspection program, Pure Technologies, a Xylem brand has assessed over 100 kilometers of the City’s feedermain network. This long-term partnership has provided the City with powerful insights to proactively manage its large-diameter mains. In 2018 and 2019, Pure Technologies worked with the City to conduct three leak detection inspections on two critical feedermains. The team located five leaks that were quickly repaired to prevent a catastrophic failure.

The City of Calgary set out to locate and address at least two water main leaks after finding chlorinated water surfacing on roadways and infiltrating valve and utility chambers. However, detecting and accurately locating leaks in large-diameter mains is challenging using conventional methods and tools. The City ruled out leaks on its distribution mains but was unable to pinpoint the location of leaks on its feedermains with standard acoustic correlators.

Both feedermains investigated for leaks are buried beneath busy roads in urban areas, and one main crosses below a railway line. Coupled with the size and criticality of the mains, a failure would be catastrophic, damaging property, threatening public safety, harming the City’s reputation, and resulting in costly repairs.

Traveling with the flow of water inside the City’s feedermains, the SmartBall platform collected acoustic data on the pipeline. The tool was continuously tracked throughout the inspection so data analysts could both confirm the presence of leaks and pinpoint their location. Using the SmartBall platform enabled the City of Calgary to inspect its feedermains without excavation, as the tool can be inserted and extracted from a live pipeline, through existing features.

“Using pipeline inspection technologies, we are able to gain valuable information about our system and critical assets. With inline leak detection tools such as SmartBall, we’ve been able to reduce water loss, reduce property damage, and prevent catastrophic failures.” 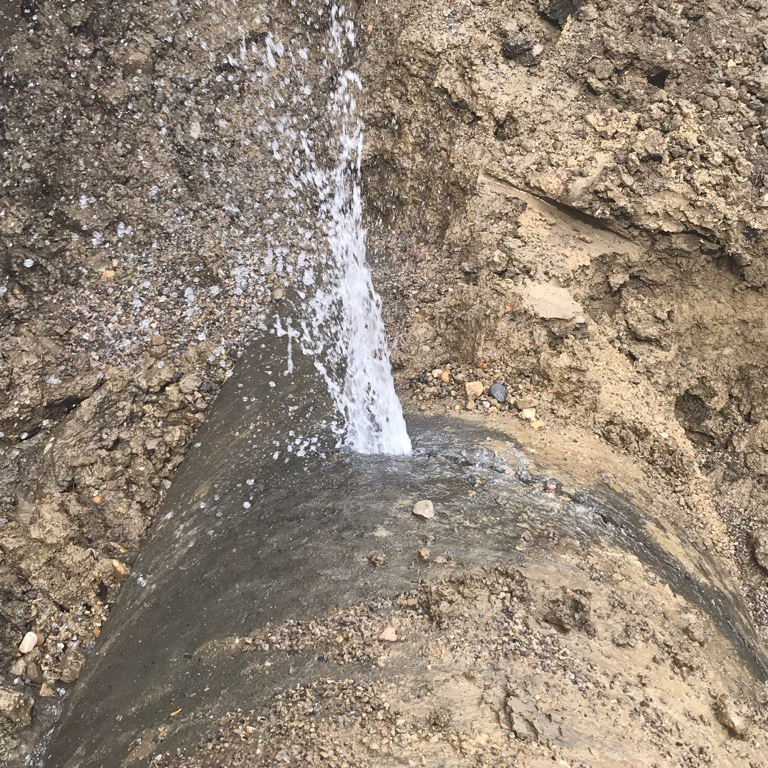 The SmartBall platform identified a very large leak on the 52nd Street Southeast Feedermain caused by a circumferential crack in this 1200-millimeter PCCP pipe.

Pure Technologies conducted three inspections in 2018 and 2019. The first inspection covered 2600 meters of the 14th Street Southwest Feedermain, which is comprised of 900-millimeter PCCP and BWP and 750-millimeter Steel Pipe with sections ranging from 40 to 60 years old. The SmartBall platform detected one large leak estimated to be greater than 37.5 liters per minute.

Pure Technologies also assessed 3300 meters of the 52nd Street Southeast Feedermain, which is comprised of 1200-millimeter PCCP installed in 1976. Over two inspections, the SmartBall platform found four leaks, including one caused by a circumferential crack in the PCCP that could be heard 250 meters away. This leak was located on the pipe barrel, indicating significant structural damage. This leak never surfaced or formed a sinkhole, so it likely would have gone unnoticed until evolving into a catastrophic failure. Another leak, found at a pipe joint, would have continued to grow by eroding the steel joint ring until eventually compromising the structural integrity of the pipe.

The City of Calgary has a unique and innovative approach to feedermain replacement. The City evaluates the risk of feedermain failure across its network by considering both the probability and consequence of failure, including the estimated impact of low pressure or water restrictions on customers. High-risk feedermains are inspected, and damaged pipes are proactively repaired to prolong the useful life of these buried assets.

Pinpointing acoustic anomalies on the 14th Street Southwest and 52nd Street Southeast Feedermains enabled the City to promptly and efficiently repair the leaks. The City has inspected nearly 25 percent of its feedermain network using acoustic leak detection, electromagnetic technology, and other inspection tools, resulting in the repair or replacement of more than 30 pipe sections. Inspection data has provided a condition baseline for the City’s feedermain network and has helped prevent another large failure. With the inspection data, the City can carefully plan repairs, reduce capital and operational costs, limit shutdown time, and reduce public disruption.