A recent water main repair highlights the accuracy of inline inspection and the value of condition assessment for proactive pipeline management.

Pure Technologies partnered with a southeastern U.S. utility to inspect a 24-inch potable water main in late 2015. The team inspected 9 miles (14 km) of the critical pipeline with the inline PipeDiver® platform. The electromagnetic tool identified some level of deterioration on 44 pipes, 1.5 percent of the total inspected. 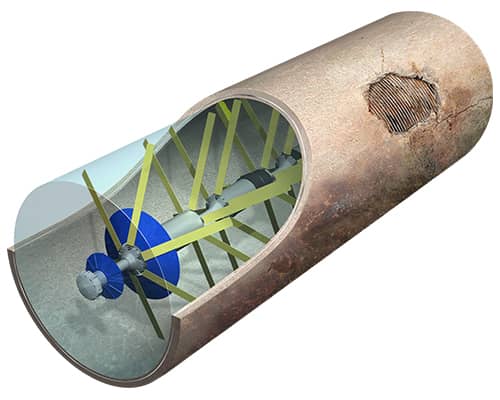 The main is made up of prestressed concrete cylinder pipe (PCCP) manufactured with Interpace Class IV wire in 1976. This now-obsolete class of prestressing wire is susceptible to hydrogen embrittlement, which can lead to broken wire wraps and eventually pipe failure.

This summer, the utility planned to repair two pipes flagged during the inspection for having a significant number of broken wire wraps. Pure Technologies’ condition assessment engineers field-marked the precise location of the distressed pipes. The pipe list from the inspection and advanced GIS mapping provided an approximate location. The team then pinpointed the pipes’ location in the field using a surveyor’s wheel to measure the distance from known features.

As the utility began to dig, it was clear the team had located the correct pipes. The pipes had large cracks. The protective mortar coating was falling off in some areas to reveal heavily corroded and broken prestressing wires as well as corrosion on the steel cylinder. Analyzing the damage in the field, the team found that the PipeDiver platform was highly accurate in determining the position of distress along the pipes.

Excavating the pipes revealed significant damage to the mortar coating and prestressing wires.

During the repairs, Pure Technologies took advantage of the isolation and deployed the PureRobotics® platform to reinspect and update the baseline condition of the adjacent pipes. The tool pairs electromagnetic sensors with live video to assess the condition of the pipe wall. CCTV did not reveal any major visual findings. However, the electromagnetic data analysis will determine whether the number of wire breaks in this section has increased over the past seven years.

Inspecting the isolated section of the main with the PureRobotics platform

Pure Technologies has collected over two decades of data from large-diameter pressure pipe inspections. We have found that pipeline failures are typically result of a very small number of distressed pipes or “weak links.”

So why do some pipes deteriorate or fail prematurely but not others? In this case, the two excavated pipes suffered from manufacturing defects, including hydrogen embrittlement, wire splicing, and low wrapping stress. It’s also possible that they were overloaded at some point. For example, they could have been handled roughly during installation or driven over without sufficient earth cover during a road expansion project or other construction activity. Impact loading or vibration can cause the Class IV wires to break — relaxing compression in the pipe, allowing the mortar to crack and separate, and eventually exposing the wires to corrosion.

Pure Technologies is conducting a forensic analysis on the prestressing wires, steel cylinder, and mortar coating from the two pipes to better understand the cause of their advanced deterioration. We are also performing a structural evaluation on other distressed pipes within the transmission main. This advanced analysis will provide insight into the pipes’ failure limits and help determine whether they can continue operating safely.

The utility prevented a potential failure by inspecting and repairing this critical transmission main. Armed with condition data, they can defensibly determine next steps for this asset. Given the pipeline’s overall condition, the utility could manage it long-term through incremental investment in reinspection and repair. If they decide to replace the pipeline or build redundancy along the line, they now have the data to plan and prioritize these actions with other capital projects at their own pace.