Could not find any links for specified country. Please check back later.
Enable high contrast mode
< View all News & Community

THE SPEED OF CHANGE: SONTEK’S HISTORY OF INNOVATION

In 1992, SonTek was a classic start-up—the vision of idealistic, young entrepreneurs pushing existing technology beyond its limits and answering the challenges posed by their brightest customers. As the company expanded its lineup and its customer base, it expanded from its foundations in ocean research to address measurement needs in rivers, lakes and irrigation systems It also ventured from early acoustic Doppler technology into the cutting edge of acoustic measurement technology. 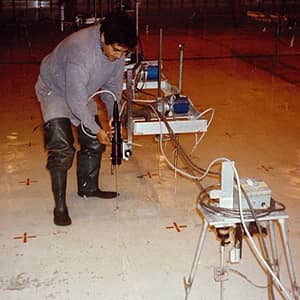 Since its founding in 1992, SonTek has been an innovation leader in measuring the physical movement of water—depth, velocity, waves and flow. Building on the use of acoustic Doppler signals to measure the movement of water, founders Ramon Cabrera and Atle Lohrmann created a culture of innovation and set the stage for SonTek's global success.

Decades before, naval engineers first harnessed the ability to send out an acoustic signal, bounce it off the sea floor, and read its return signal to establish the speed and direction of ships traveling on the ocean. Following the advent of those Doppler Velocity Logs, advances in microelectronics and digital signal processing greatly improved the transmission, reception and interpretation of acoustic signals. Those advances enabled scientists to start reading acoustic signals as they bounced off particles and bubbles suspended in the water column rather than just off the bottom of the sea. That allowed them to apply acoustic Doppler technology to profile water currents for scientific and other practical applications. The Acoustic Doppler Current Profiler (ADCP) was born.

During their first year in business as a start-up in San Diego, California, Cabrera and Lohrmann were asked by Nicholas Kraus of the U.S. Army Corps of Engineers to create a single-point 3-D velocity measurement instrument that could be used in a laboratory to provide extremely high sampling rates at high precision with no sacrifice of accuracy. The instrument was to be used to collect data for the Corps' legendary Waterways Experimental Station in Vicksburg, Mississippi.

SonTek rose to the challenge with the invention of the Acoustic Doppler Velocimeter (ADV). Unlike the monostatic ADCP, which used the same transducers to both transmit and receive its acoustic signal, the ADV-1 was a bi-static design, with a separate transmitter and receivers. Its unique, three-pronged sensor design provided the rapid velocity data from a single point located 5 cm (about 2 inches) from the transmitter. This was vital for the station's researchers, who were building elaborate models to study the hydraulics of floods and other events along the Mississippi River.

Today, the original SonTek ADV-1 is on proudly display at the Army Corps Waterways Experimental Station's museum in Vicksburg, Mississippi, where it stands as a symbol of Dr. Krause's vision, fulfilled by innovative technology from SonTek.

While the ADV was becoming a staple for laboratories around the world, demand was growing for instruments that could provide real-time data for oceanographic studies in the field. In 1994, the National Science Foundation awarded SonTek a grant to develop an acoustic Doppler profiling instrument that could be deployed in a wide range of environments, including near-shore and port areas.

SonTek responded with the Acoustic Doppler Profiler (ADP), a robust field instrument with a three-axis array for 3D current profiling. The ADP also introduced unique design features and software to minimize side-lobe interference, a loss of data close to the signal boundary—the water's surface or the bottom—that significantly reduced the accuracy and sampling field of other profilers. By reducing side-lobe interference, the SonTek ADP could be used in shallow water as well as in deeper deployments.

The ADP also represented SonTek's first major foray into innovations in power management, setting the stage for a wide range of instruments for field deployments lasting weeks or even months.

The success of the ADV in laboratories and the ADP in oceanographic fieldwork sparked interest in SonTek's instruments among new audiences, ranging from researchers to harbormasters. While the early adopters of ADVs and ADPs were thrilled with the high performance of SonTek's early instruments, many prospective users were more interested in more practical devices that were smaller, easier to use, and could withstand longer deployments. To meet the growing need, SonTek developed the Argonaut platform, a rugged, compact, 3-D system that took advantage of powerful, new CMOS-based integrated circuits and put them onto two small, surface-mount electronics boards barely larger than a pack of cigarettes.

Just a few years before, acoustic Doppler instruments were at least as large as a coffee table. The first Argonaut—the Argonaut-MD—was roughly the diameter of a wine bottle and slightly over two feet (60 cm) tall to enable plenty of battery capacity. The streamlined instrument tackled the challenge of measuring deep ocean currents, where the need for compact size, long deployments and reliable data had long bedeviled engineers. Taking advantage of the Argonaut-MD's built-in 2 MB RAM chip (which was a massive data bank in 1996) and the instrument's ability to sleep between acoustic pings, the innovative system was able to gather thousands of data points between maintenance visits. The Argonaut was rapidly accepted by NOAA as a means to collect ocean circulation data for climate studies in the tropical Pacific.

Building on the Argonaut concept the following year, SonTek introduced a pair of new instruments roughly the size of a standard coffee can:

The Argonaut-SL was a game-changer for SonTek. Initially designed for ports, where it could be mounted to a piling to provide current data across the width of a channel, it was quickly adopted by U.S. Geological Survey (USGS) hydrologists for measuring the speed of water flowing in rivers. Until then, SonTek was staffed by oceanographers. To meet—and understand—the emerging needs of river hydrologists, the company began hiring freshwater experts and studying flow and discharge. Argonaut-SLs were soon mounted on bridges, pilings, canal walls and customized fixtures around the world, fueling insight into river, stream, canal, lake and stormwater flows. In a few years, the Argonaut-SL became SonTek's leading product line.

Going With The Flow: The FlowTracker

As SonTek gained familiarity with the surface water hydrology market, the company sought to apply its instrumentation insight and innovation to developing more new solutions to old problems. Driven by the pent-up demand for an electronic alternative to the classic propeller flow meter—used for over a century for measuring discharge in rivers—SonTek created the FlowTracker Handheld ADV system, which married SonTek's original ADV innovation with the ultra-flexible Argonaut platform.

Unlike the mechanical propeller meter—which required the operator to count clicks in a headset, convert the clicks to an estimate of velocity and, ultimately, calculate discharge on paper—the FlowTracker included a handheld interface and powerful calculation software in a portable, field-ready instrument.

Easy to use—new technicians could master it after a few hours of training and practice—the FlowTracker was an international hit and disrupted the worldwide use of mechanical current meters for stream flow. SonTek adapted its software package to include both ISO and USGS discharge calculations as well as interfaces in English, Spanish, French, Italian and German. FlowTracker sales exceeded projections and lifted the company to the next level, solidifying the SonTek brand name as a leader in innovation.

In 2007, the company moved to its present location—a larger, newly built, better-appointed facility with a research-grade testing tank, improved workspaces for the engineers, and more commodious office space for the marketing and customer service teams that had grown to cover a global market. Staying close to its San Diego roots, SonTek had grown over the years from its experimental, "skunk works" atmosphere into a global high-tech company in a space that encouraged further growth.

With its growing presence in the river and lake markets, SonTek embarked on its next bold, new effort—a platform to put its ADPs onto hulls, allowing researchers to conduct river transects and profile velocity from the water's surface. The company's first hull-mounted instrument, the RiverCat Mini-ADP in 2000, was the inspiration to create not just the industry's first floating instrument, but one that would deliver data of unprecedented detail and accuracy in a complete, turnkey solution for measuring river discharge from a floating platform.

The entire SonTek team was engaged, developing the five-beam RiverSurveyor S5 and the nine-beam M9 and the multi-frequency platform at the heart of each instrument. A huge leap from the single-point ADV or the single-frequency Argonauts and ADPs, the new RiverSurveyor S5 and M9 were the first instruments of their type to include a vertical beam. The unique combination of vertical beam and 25-degree slant-angle beams provided the capacity to profile water velocity and measure depth using bottom tracking, bottom detection, incoherent, pulse coherent and broadband pulses and processing. SonTek's revolutionary SmartPulseHD technology provided dynamic selection and optimization, allowing the S5 and M9 to automatically switch frequency and pulsing schemes for each sample based on velocity and depth to deliver seamless, high-definition data over a wide range of environmental conditions. With a RiverSurveyor S5/M9, operators could measure from shallow to deep sections of a river with a single system, a task that previously required two separate instruments with different frequencies to achieve the same performance.

While programmers were developing the pinging and processing software—and making them user-friendly—other SonTek engineers developed the integrated DGPS and RTK GPS systems, batteries, telemetry packages and hulls that supported the RiverSurveyor.
The result was a revelation when the RiverSurveyor S5 and M9 were finally launched in 2009—rich, detailed visualizations of depth, velocity and direction in vivid colors processed by RiverSurveyor Live software. From irrigation canals to the churning Amazon to Arctic glaciers, hydrologists could dive into mysteries of current and flow that had been buried deep beneath the surface.

As the RiverSurveyor market propelled SonTek to new heights, the company delved into the specific needs of the irrigation market, engaging in collaborations with the Irrigation Training and Research Center (ITRC) at California State Polytechnic Institute as well as projects from the arid western U.S. to Spain's agricultural heartland. SonTek hosted its first user conference in Nevada and made inroads into China and other Asian markets.

SonTek has continued to innovate, making it easier and more reliable than ever to gather rich data, with ever-smaller instruments. The novel, palm-sized CastAway-CTD provides university researchers, consultants and others with conductivity, temperature and depth data to support their other measurements. The CastAway-CTD also empowers citizen scientists, like Inuit pack ice hunters in Canada tracking changes in the Hudson Bay or long-distance sailors gathering data along their routes.

Similarly, the FlowTracker 2 handheld ADV system—which upgraded SonTek's first blockbuster product with a state-of-the-art graphic user interface to streamline measurement collection and improve data quality—is being used by technicians and scientists of all stripes from northern California to Nepal. And the SonTek-IQ brings the latest technology to irrigation canals, shallow streams and rivers, and pipes for measurements even in extremely shallow water and low-flow conditions.

In laboratories and irrigation systems, from pure glacial melt to stormwater overflow, SonTek instruments have become the gold standard in a wide range of applications. And from its roots as an ocean-tech start-up to its current role as an integral part of Xylem Analytics—a global leader in analytical instrumentation—SonTek has built a reputation for innovation, quality and a never-ending focus on the needs of its customers around the world.