It looks like you are coming from United States, but the current site you have selected to visit is Greece. Do you want to change site?

The world’s first intelligent pumping system, Flygt Concertor, has eliminated clogging at Stierberg wastewater pumping station and saved €5,400 in just nine months. Before a six-month trial, the pumps clogged at least once per week. Learn how Flygt Concertor solved the problem.

The Stierberg wastewater pumping station was struggling with severe clogging due to high levels of debris in the plant’s wastewater flow. The station is located in the Reinhalteverband Mühltal and Region Böhmerwald area of Upper Austria.

Clogging instances were becoming so common that station operators, RHV Mühltal, were required to unclog the pumps at least once a week. To address the issue, RHV Mühltal agreed to trial Xylem’s Flygt Concertor system with integrated intelligence, which yielded immediate and impressive results.

More clogs than any other pumping station in the region

RHV Mühltal is the largest wastewater management utility in Upper Austria, overseeing twenty-four municipalities across the Reinhalteverband Mühltal and Region Böhmerwald. The pumping station at Stierberg is one of the smaller stations that the company operates, with a capacity to pump just 80 cubic meters (m3) per day. Despite the comparably low levels of wastewater carried by Stierberg, the pumping station was very problematic for RHV Mühltal, experiencing more instances of clogging than any other station in the region.

The pumping station’s biggest challenge was dealing with the high levels of debris, including wet wipes, rags and solid materials, entering the sewer system. Wet wipes are made from non-woven fabrics and their fleece-like properties mean they cannot be easily broken down like regular tissue paper.

An intelligent pumping system that adapts to conditions 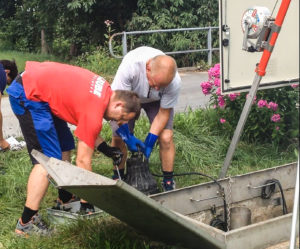 To reduce chronic clogging and allow for reliable, uninterrupted pumping, Xylem’s Flygt Concertor was installed at the Stierberg station in December 2016. The pumping system has operated without disruption throughout the six-month trial period.

“Clogging at Stierberg had become a major issue,” says Klaus Pfleger, Managing Director of RHV Mühltal. “The debris carried in the wastewater flow was also wearing out the pump impellers, which meant that they had to be replaced every two years. We were relieved to learn that there was a solution to our problem, one which can eliminate clogging and increase operational efficiency.”

Flygt Concertor is a pumping system with integrated intelligence that senses the operating conditions of its environment, adapts its performance in real time, and provides feedback to pumping station operators. It features sump, pipe and pump-cleaning functions that, together with Adaptive N-hydraulics, effectively prevent, detect and solve clogging.

During the six-month trial period, no instances of clogging were reported at the pumping station. The trial period was so successful, Flygt Concertor was permanently installed at Stierberg in June 2017. Since initial installation, Concertor has been operating without disruption and the system has delivered significant cost-savings, as regular maintenance call-outs are no longer necessary. In the nine months that Concertor has been in operation, RHV Mühltal have saved an estimated €5,400 in maintenance costs, and the pump continues to operate without interruption.

“Since installing Flygt Concertor at Stierberg, we have noted a considerable increase in the efficiency of the pumping station,” says Pfleger. “Flygt’s SCADA system gives us complete control, allowing us to monitor the pump system and quickly detect any problems. We can now accurately adjust the pumping operation based on real time and logged data and, as a result, wear on the impellers has reduced significantly.”