Outsourcing can be defined as “the strategic use of outside resources to perform activities traditionally handled by internal staff and resources”. Outsourcing is a strategy by which an organization contracts out major functions to specialized and efficient service providers who ultimately become valued business partners.

As Vice President of Engineering at EH Wachs from 1980 until 2003, my main focus was designing tools with the highest torque output possible. Finishing my career at Wachs Water Services, I learned why. Most utilities only exercised or operated valves 12” or greater when a main was broken or for construction purposes. Most of the large valves were Double Disc (DD) until the late 60’s when Butterfly Valves (BF) started to get attention and then around 2000 when Resilient Wedge (RW) started to replace both the DD and BF. Given the fact that most of the large valves installed prior to 1980 were DD. I’ll start there.

What I realized was that very few utilities exercised valves, especially large DD. Almost always the valve has failed from someone over torquing it. The DD valve has a life expectancy exceeding more than 100+ years. The majority of DD valves have only been operated (exercised) when needed for a shutdown. They are not designed to sit for 20 years getting a buildup of minerals from source water on moving parts and then be forced shut in an emergency. That is where expertise comes in.

A valve sitting without being operated for a long period of time can experience a multitude of problems. DD valves 16” and up will normally have gearing and another smaller diameter valve referred to as a bypass. Without a pre-inspection of the things like gear mesh, bonnet bolt corrosion and monitoring conditions as the valve is operated, one of the critical components may fail. Needing to operate one for say a main break now requires excessive torque due to hard deposits on the stem, expanding wedges and nut. Without a highly trained operator the most common technique was to keep increasing torque to achieve a shut. The result was either using 100% of the machine capacity without success, breaking part of the drive train or successfully achieving a shut. The most common result became breaking parts of the geared drive train or operating at a torque level that made management stop and try backing up the shut. 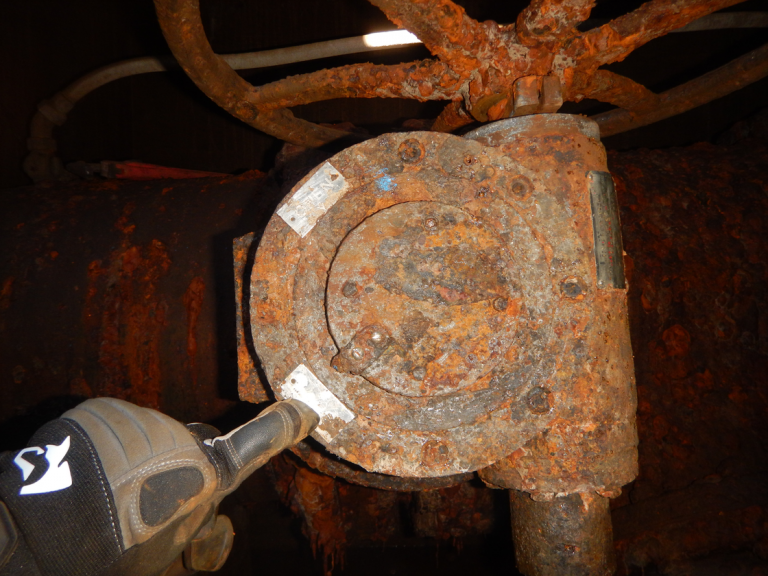 BFs are a different animal and have mechanical stops that control the disc rotation and are preset. Increasing the torque to get water from leaking thru will only break the actuator that operates the valve. The fix would be resetting the stops assuming the rubber seat isn’t damaged. BF have a much lower life expectancy than DD before a repair is needed.

Companies selling valve turning equipment normally shows how to operate the machine and not what is needed to get a 1948 DD valve operating properly. Getting a DD valve operational only solves parts of the equation. A lot of large valves are broken and awaiting replacement. Outsourcing to a company that has the experience to renew also should have the resources to rehabilitate in-situ problems such as repair/replace broken gears, bonnet bolts, packing/parts, shafts and odd operating nuts. Bottom line is outsourcing an initial large valve assessment and rehabilitation program to a company with a proven track record will save time and expensive replacement costs.