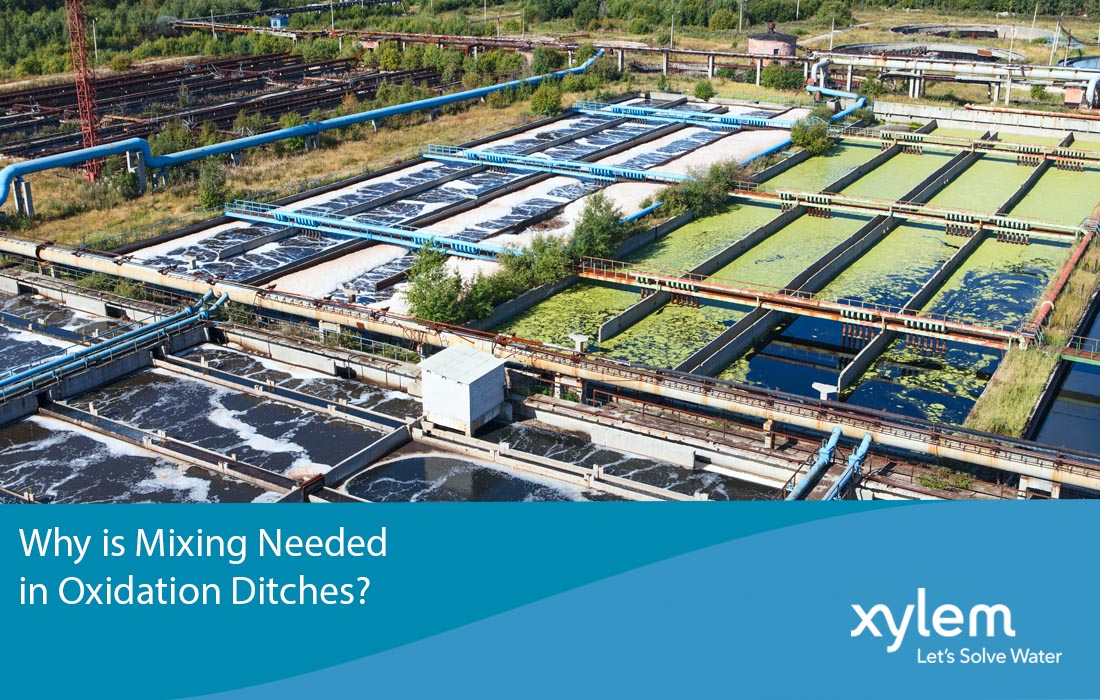 In a typical oxidation ditch the sewage or mixed liquor circulates an average of 20-30 times before leaving the tank. In view of hydraulic residence time, this resembles complete mixing. However, oxygen is provided in localized parts, either by surface aerators or by bottom-mounted fine bubble diffused aeration (FBDA) systems.
While the mixed liquor is well mixed with respect to the constituents entering on the inlet side (BOD, nutrients), the activated sludge process consumes the oxygen provided by the aeration system at a pace that sets up concentration gradients of dissolved oxygen (DO).

Mixing in oxidation ditches is primarily a matter of circulating the liquid. While successfully blending the incoming flow, the activated sludge and any other solids fraction present are kept in suspension by this circulation.

In the 1950s the first oxidation ditch processes relied on surface aerators to drive the flow. This design is still present in many locations, with either vertical or horizontal shaft aerators. The amount of aeration and mixing may, at best, be varied by changing the speed or immersion depth of the rotor.

The idea to use bottom-mounted FBDA and independent flow generators dates back to a famous 1965 paper (Pasveer & Sweeris, “A New Development in Diffused Air Aeration”, Journal of the Water Pollution Control Federation). Since then, this concept has become a de facto standard worldwide. FBDA requires blowers to be installed, which brought a new technology into wastewater treatment (grit chambers and sludge tanks also now use blowers). Initially bringing hurdles for many sites, blowers are now a conventional component at treatment facilities.So, why is this?

The bottom line is a strong increase in energy efficiency. In 1965, Pasveer & Sweeris already claimed a factor 2.5 higher efficiency, and technology development certainly hasn’t stopped since. But another important factor is the versatility gained by controlling flow generation and aeration independently. Reduced maintenance and less need for deicing in cold climates are other important factors.

Today’s high-efficiency mixers used for both circulation and mixing also satisfy the requirement for independent flow generators, which are required when FBDA systems are operating.

Since that seminal 1965 paper, it has also been understood that there is an optimum horizontal flow velocity that reduces the spiral flows caused by the bubble plumes, while keeping energy consumption at a minimum. This flow velocity is essential for maintaining the bubbles in the liquid long enough to attain a high oxygen transfer rate.
Oxidation ditch systems that alternate nitrification and denitrification zones in the same ditch use horizontal flow velocity to manage the oxygen transfer rate depending on the aeration layout.

The horizontal flow effect (HFE) that accounts for greater aeration energy efficiency than conventional fully floor-covered FBDA systems is sometimes hard to measure. Consequently, the optimum flow velocity for a given aeration design is not fully known. Work is underway at Xylem to perfect the combined, two-way coupled aeration/mixing design methods.

With ever-deeper tanks (8 or 10 or 12 meters) being used to reduce footprint, both energy efficiency and robustness are more important today. Large tank depths require new ways of thinking to maintain the robust and efficient operation of oxidation ditches of more traditional sizes, and pitfalls that once seemed moderate might take on new proportions in deep tanks.

However, the success story of oxidation ditches doesn’t end here. More efficient air diffusers and mixers, and new ways of operating them, are still emerging in the wastewater treatment industry.

Want to learn more about mixing? Here's another topic you might find interesting: