No Compromise on Reliability: A WWTP Turns on a Dime

Challenge
The plant's raw sewage pumping station has six dry-pit pumps with large 950-hp motors. In 2013, following a detailed condition assessment, the city learned that the condition of three of the six motors was outside acceptable limits, severely affecting their reliability. The motor failure would dramatically reduce the station total pumping capacity, in the midst of high flow season: the spring melt.

Solution
While the procurement of new motors started, the least affected of the three motors facing failure had its stator windings cleaned, after which it was reinstalled. This was enough to increase one motor’s reliability. But the city needed additional temporary pumping capacity installed and operational before the high flow period during the spring runoff. Four pumps were proposed: two Flygt NS-3531 and two Flygt CS-3400. 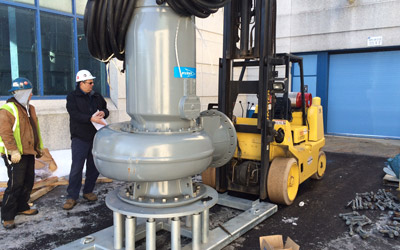