A deadly explosion at a wastewater plant in Florida led two Xylem employees on a six-year journey to improve the safety of wastewater workers. Their new book combines science with reports on some of the biggest accidents in recent history.

Impeller recently spoke with Amy Forsgren, a technical writer at Xylem, who wrote the new book Airborne Occupational Hazards in Sewer Systems with Kristina Brinck, an information designer at Xylem.

Why did you want to write this book?

The idea came in 2010, when I read about a horrible accident in Florida at a wastewater treatment plant. It was a completely unnecessary accident, where two people died a really horrible death. The plant had ignored some very basic safety procedures. They sent a crew to weld on top of a tank full of methanol without taking the right precautions, and the hot work caused a huge fireball.

I was so angry – it wouldn’t surprise me if steam was coming out of my ears. Then I ran into Markus Holmberg, the manager of safety at Xylem, and told him about the accident and how upset I was. He said, “What are you going to do about it?” So then Kristina and I decided to write a book about safety.

What did you want your book to focus on?

It evolved over the six years it took to write it. Instead of looking at wastewater treatment in general, we decided to focus on airborne hazards. For treatment plants, the most common hazards are the standard hazards that every industry has, like dangers from falling, electrocution, crushing by moving parts. There are already a lot of books covering these, not necessarily for treatment plants but for industries in general.

But the sewers have a very special atmosphere, because sewer water can contain methane, which is explosive, and hydrogen sulfide, which is highly toxic if you breathe it. Both of these are created as waste decomposes. We found that in a lot of safety books when they discussed these gases they would say, “They aren’t really a danger unless you have to work in a sewer.” We looked and there aren’t any books about the special circumstances for sewers.

Who do you hope reads your book?

Engineers for municipal water and wastewater systems, anyone who is going to send someone down into a sewer. We would like them to know the dangers of what they are sending people into. That is our main target. But also the chapter on hydrogen sulfide will be of interest to anyone doing occupational safety research on hydrogen sulfide, especially the statistical analysis we do. I think we are the first people in the world to summarize this information about hydrogen sulfide.

What did you learn about hydrogen sulfide?

What we did in our book is summarize all of the findings about biomarkers and hydrogen sulfide deaths from Japan and the US, which hadn’t been done before. Eight years ago in Japan, it became popular to commit suicide using hydrogen sulfide. Over 100 people killed themselves this way, almost exclusively young men.

But there were a a few accidental deaths as well. In one case a person went into the bathroom to commit suicide, and their parent jiggling the locked bathroom door was enough to let gas escape around the door. The gas is so lethal that the parent was also killed.

What we found is that a lot of people have died from hydrogen sulfide, and because it kills so fast it doesn’t show up at all in urine and often not in the blood. We can now say that we have data that proves that you can die from high levels of hydrogen sulfide and it will still not show up in an autopsy. This is important to know when determining the cause of a workplace death.

How did you and Kristina work together? 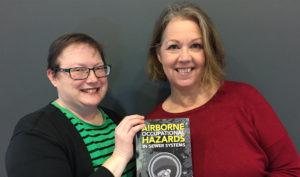 A few weeks after reading about the accident in Florida, I talked to Kristina about it. She has a background in journalism. I told her there were hundreds of safety books out there and nobody reads them. She said, “That is because they are very boring, Amy.” So we talked about how to make a book much more interesting. We finally decided to name accidents in the text wherever we could and provide an in-depth study of selected ones. So Kristina looked into big accidents and spent a lot of time researching those, and I read it all and wrote the chapters.

What interests you about hydrogen sulfide?

What interests me is the mismatch between how dangerous it is and how we all view it. Hydrogen sulfide has this ridiculous, rotten-egg smell, which we are all familiar with and don’t take seriously. But it is as toxic as cyanide. It is an extremely toxic gas, and I find that fascinating. Of the people who die from gases across industries in the US, the major cause is carbon monoxide poisoning. The second largest cause is hydrogen sulfide. Methane gas and gas leaks get all the attention, but it is really hydrogen sulfide that injures so many.

What can people do to stay safe?

Testing the air is number one, and having a mask to put on is just as important. From the employer’s point of view, education is key and having a safety program in place so that people do all the tests before they go down in a sewer and have the right equipment. There’s plenty of air-testing equipment on the market that’s very easy to use and not expensive.

How many people does hydrogen sulfide affect every year?

In the US, on average two people a year die from hydrogen sulfide while working with wastewater. There are also a lot of injuries. For every death, there are probably scores of other people who have been exposed to it severely enough to seek medical attention. One of the myths is that if you don’t die, you will be completely fine. That is not true. Hydrogen sulfide can cause all sorts of neurological problems and brain damage – it can ruin lives and tear families apart.

Were there other interesting findings in your book?

Something that surprised me very much was when we started looking into AIDS in sewer systems. A couple of years ago AIDS was the flavor of the month, and a lot of safety professionals were talking about AIDS exposure in sewers. It turns out that the danger from AIDS in the sewers is zero, since the virus does not survive well outside a cell. So this is at least one danger we can all strike off the list. Hepatitis, however, is still the big danger, as well as tetanus, and parasites that are spreading more and more in the sewer systems.

How does it feel now that the book is out?

I hope that we have done something helpful. We were very happy to get so much support from Xylem management. We also got a lot of help from Dr. Per Hedmark, a research scientist at Xylem.

When the publisher was getting endorsements for the back cover of the book, they approached one of the best known scientists working on hydrogen sulfide, Tee Guidotti. He wrote, “This book will be useful to public health professionals and invaluable to civil engineers designing municipal sewerage. It may well save a life.” When the publisher sent this over, I thought, wow. If we save a life, this was worth it.
—
Save 20% when you order the book online!
Enter promo code EEN17 at checkout.

Other books in the series: Advances in Water and Wastewater Transport and Treatment.