Challenge
Built in the 1980s, Little Blue Valley Sewer District operates Atherton, which was designed to reduce the primary process chain to preliminary bar screening and aerated grit removal, while relying solely on secondary treatment performed in four, standalone 42-ft by 400-ft aeration/ clarification basins. The $73-million retrofit changed the plant to a more conventional activated sludge process. The work included modification of two of the four existing oxidation ditches and mothballing the other two. Four, 1.48-MG primary clarifiers were built, along with five, 2.38-MG secondary clarifiers and an upgrade to the influent pump station. To correct discharge problems, a 640-hp, five-pump effluent pump station was built. This now allows four modes of operation, depending on the flow level.

Solution
The district replaced the first-generation mixers with 16, Xylem 5-hp electric submersible mixers, arranged in a double battery of eight each at the ends of the channels. These submersible units were fitted with “banana blade” fiberglass props that rotated at 42 rpm to steadily propel and churn the mixed liquor suspended solids (MLSS) as it flowed around the channel. 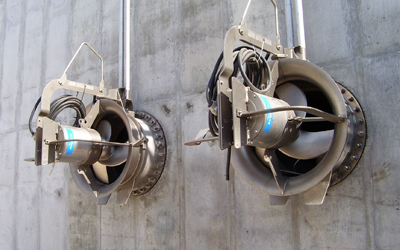