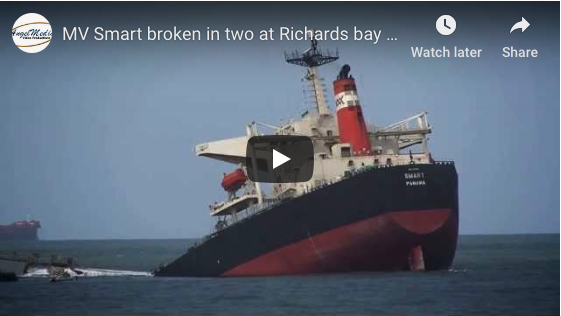 Earlier this year, as the cargo ship MV Smart left Richards Bay in South Africa, heavy swells 10-meters high lifted the ship then smashed its hull onto the harbor floor. The vessel buckled and broke in two, leaving the ship stranded on a sandbank. Xylem’s Flygt 2600 series pumps were brought in to keep the ship stable so its fuel oil and cargo could be safely removed.

On August 19, 2013, the 230-meter-long MV Smart sailed out of Richards Bay, home to the largest coal export facility in the world. Heavy seas soon overcame the ship, and it suffered extensive damages to it hull and steering gear after hitting the harbor bottom.

Although three tugboats tried to assist the vessel, they were unsuccessful. The MV Smart’s twenty-three crew members, including the captain, were airlifted to safety, leaving the ship partially submerged while carrying 1,830 tons of fuel oil and a cargo of 148,000 tons of coal.

A salvage team led by Subtech, a South African marine services company, was called in to assess the damage and make plans for the safe removal of potential pollutants. The team focused first on removing the fuel oil, since it posed the largest environmental risk. In order to stabilize the ship during the salvaging process, Xylem’s Flygt 2600 series pumps were used to move seawater in and out of the vessel.

“The Flygt 2600 series pumps were used on various parts of the ship, such as to keep the engine rooms dry and assist with ballasting,” says Shaun Hattingh from SAMCO Pumps, Xylem South Africa’s distributor for the KwaZulu-Natal province. “The salvage team pumped seawater in and out of the ship to keep it stable, while technicians were busy unloading the coal and pumping out the heavy fuel oil.”

Flygt 2600 pumps can handle flows of up to 100 liters per second (1500 GPM), heads to 90 meters (300 feet), and solids of up to 80 mm in diameter. The dewatering pumps are engineered for professional use in tough mining, construction, tunneling, and industrial dewatering applications.

“Since the Flygt pumps are ergonomically portable to maneuver into and around isolated parts of the ship, they worked efficiently and fiercely to get the job done,” says Hattingh.

Based on the success of the pumps, Flygt pumps (the 2670 MT, 18kW) were ordered and incorporated into plans for the next stages of the salvaging. The South African Maritime Safety Authority (SAMSA) stated that the operation went extremely well. SAMSA’s Nigel Campbell said that they managed to get through the operation without spilling a drop of oil into the sea.

Read more about the Flygt 2600 series.