It looks like you are coming from United States, but the current site you have selected to visit is Bahamas. Do you want to change site?

When an emergency bypass was needed at the Rivanna Water & Sewer Authority, Xylem’s expert team worked around the clock – and around several obstacles – to get the job done.

Operators at the Rivanna Water & Sewer Authority (RWSA) in Charlottesville, Virginia, recently discovered a compromise in their 54-inch secondary effluent water line. The obvious solution for the line, located at their Moores Creek Advanced Water Resource Recovery Facility, was an emergency bypass.

The facility, however, needed a temporary system that wouldn’t harm the nearby creek or shut down the critical access bridge crossing it.

A strong partner with the right expertise

Xylem’s team was quickly called in to develop an emergency bypass solution that would maintain the facility’s infrastructure and protect the surrounding environment. Since the sewer authority had previously worked with the Xylem team, they knew they would be in good hands. 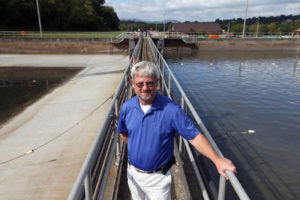 An emergency bypass with a few twists and turns

Since the bridge was the only access point to the back half of the complex and the authority’s administration building, shutting down the bridge for any length of time during the bypass was not an option.

The Xylem team immediately began mobilizing pipe and the necessary rental equipment for the temporary bypass. To handle the 30 million gallons per day (MGD) of flow that RWSA needed, the bypass would require three flanking lines of 18-inch high-density polyethylene (HDPE) pipe.

The length of the bypass turned out to be approximately 1,400 feet for each 18-inch line, and 5,000 feet of pipe was mobilized quickly from several Xylem rental locations. Once on location at Moores Creek, the pipe was fused and assembled by Xylem technicians, 500 feet at a time and then dragged into place and fused together.

A pump system that brought peace of mind

To power the bypass, four Godwin diesel-driven, critically silenced CD400M Dri-Prime pumps were mobilized and installed. To save energy and diesel fuel costs, the pumps were installed and started sequentially, only coming online as needed.

Each of the three 18-inch lines had a dedicated pump capable of handling approximately 10 MGD of flow. Each pump was set up with a level transducer, which was pre-set to turn the diesel pumps on and off depending on the fluid level in the wet well. If the system flow in a line increased, its pump was automatically activated. During lower flow, one or possibly two pumps would be running, but as many as three pumps would run during higher, peak-flow activity.

The fourth pump was an open-canopy, redundant mechanical back-up that would kick-in if any of the other three pumps failed. For additional peace of mind, the bypass system included an alarm agent that was programmed to alert RWSA personnel if the pump wasn’t running at optimal levels, or was possibly approaching pump failure. 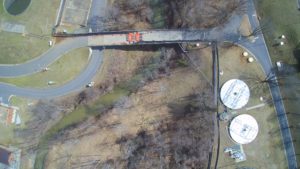 Emergency bypass solution in less than a week

Since the bypass had to negotiate the busy bridge without shutting down traffic, the Xylem team worked 24/7 shifts to expedite the installation. The team completed the installation in less than a week. Once the flank of pipes was in place across the bridge and across the line of traffic, three road ramps were provided to maintain bridge access during the month-long emergency bypass operation.

Ultimately, the quick response by the Rivanna team, supported by Xylem team efforts and systems, was an example of the true environmental stewardship that RWSA is known for. The authority’s work helped keep their local streams and rivers safe from negative environmental impact.

Watch the video about the project