When most of us forget to water a plant, nothing truly amazing happens. For Sureeporn Triphetprapa, it led to an idea that took her all the way from southern Thailand to Sweden, where she and her partners won the Stockholm Junior Water Prize.

“When thinking of ideas for our project, our teacher told us to look around our environment,” Triphetprapa says. “I noticed that even though I had not watered my bromeliad plant, it hadn’t died.”

Why did the plant not die? She and her partners, Thidarat Phianchat and Kanjana Komkla, researched the bromeliad plant online to learn its secret. They found out that the plant uses its leaves to collect moisture from the air, which then drips down into a cup-like area at its center. This makes the plants able to survive long periods of drought.

The research team, three eleventh graders from southern Thailand, decided to see if they could use the plant’s design to help farmers fight droughts.

“First we had to decide what material to make our device out of,” Triphetprapa says. “We researched online and found out that aluminum has a low heat capacity. This means that it stays cooler than other materials and will collect more condensation.”

The team constructed their own artificial bromeliad plant, made of aluminum, to see if it would help local rubber tree farmers. In Surat Thani province, where the students come from, rubber tree and coconut plantations are an important part of the economy.

Thailand, in fact, is the world’s largest producer of natural rubber, making more than 3.6 million tons of natural rubber per year. The rubber is made from the latex that drips from rubber trees.

The Thai students began testing their device with hundreds of farmers. The device was placed in the ground near rubber trees, with the hopes that it would increase the soil moisture. The results were impressive. 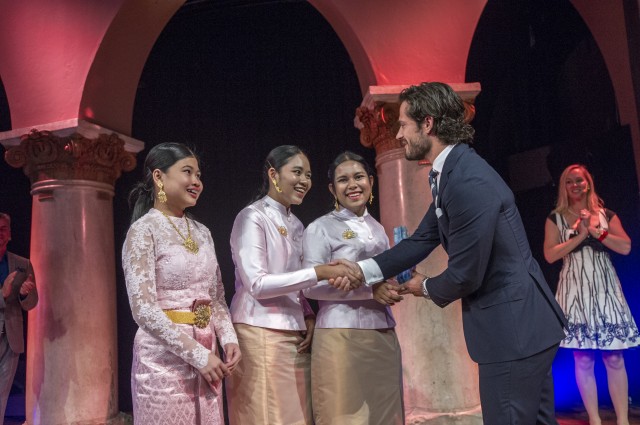 Since the device would cost farmers less than a dollar, it would pay for itself in just a few days. The device led the students to win the Junior Water Prize in Thailand, and later the international competition in Stockholm.

“We were really excited and happy to win the Stockholm prize,” Triphetprapa says. “I want to expand our project on a larger scale now. I will use our device to relieve poverty in our community.”