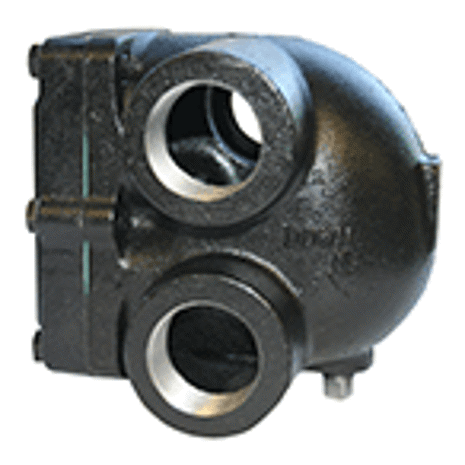 Float and thermostatic traps operate on the density principle. A thermostatic vent in the top of the trap allows free passage of air during start-up, and closes near saturation temperature. Condensate fills a float chamber, causing a float to rise, and through a lever mechanism pulls a valve off its seat and opens the orifice of a discharge valve. The opening and closing of the seat provides modulation to handle light or heavy condensate loads.

During start-up, the thermostatic vent is open to allow free passage of air.

A lever connects a ball float to a valve and seat. When the condensate that fills the float chamber reaches a certain level, the float rises pulling the valve off the seat, opening the orifice of the discharge valve and draining the condensate.

The thermostatic vent will close near saturation temperature. The balanced design allows venting of non-condensables that collect in the float chamber, when operating at design pressure.

The condensate port is normally closed during no load. As condensate enters the float chamber, the float and lever mechanism movement opens and closes the seat to provide drainage equal to the condensing rate.

Ready to select this pump as well as accessories, air/dirt separators, tanks and PIC valves? Click below to open the new Bell & Gossett ESP-Systemwize selection tool and enter your duty points to begin selecting the most energy efficient model for your system: