Challenge
The City of Houston required a new wastewater lift station in Sims Bayou as the existing station had exceeded its useful life. Due to large variations in total daily head — a static head of 46 feet but reaching as high as 138 feet — pump selection was an issue. The concern centered on net positive suction head required when one pump was running by itself, especially since the consulting engineer, Klotz Associates, had ruled out the use of variable frequency drives (VFD). Also, the City of Houston preferred to build a “Station in the Round” due to lower construction costs. The consultant proposed a 42-foot diameter and 46-foot deep wet well to accommodate six pumps. Based on the pumps recommended by Hahn Equipment, a Xylem distributor — six Flygt CP3356, 280-horsepower submersible pumps — Xylem conducted a computational fluid dynamics (CFD) study to analyze potential fluid flow problems at the station.

Solution
The six CP3356 Flygt pumps were selected over competitive equipment, which actually offered higher horsepower units. Hahn Equipment convinced the City of Houston that the total horsepower of the six Flygt pumps would be less than five competitive pumps, resulting in a lower cost solution to this pumping challenge. 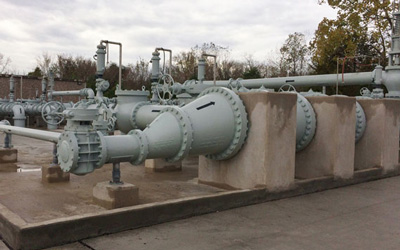