In March 2017, the first-ever Flygt 3069 Adaptive-N™ to go into service in France faced high expectations. The client, leading French water company SUEZ, had been battling constant breakdowns in one of the pumping stations they operated, due to blocked wastewater vortex pumps with a rate of three clogs per month on average, causing service disruption, increasing servicing costs in unplanned callouts and, potentially, environmental hazards in case of backflow or overflow. Three months from installation, the 3069 Adaptive-N™ has not clogged a single time.

Flygt 3069 is a cutting-edge wastewater pump that ensures continuous clog-free pumping in the toughest conditions and includes Xylem’s patented Adaptive N™ technology, designed to eliminate clogging. The pumping station in question is located in Sully-sur-Loire, a community of 5,700 residents near Orléans that is widely known for its stunning fortified chateau rising from the banks of the river Loire.

“In this location two pumps, a vortex pump and the new Flygt 3069, work in tandem so, if one is down, pumping is not fully disrupted until the second pump clogs up,” said Jean Christophe Chambault, Project Manager SUEZ, during a visit to the site. “Before the installation of the new Flygt 3069, the two vortex pumps could clog quite fast, one after another. The situation was becoming increasingly critical.”

When solid objects such as stringy fibrous material and modern waste enter the inlet of a conventional pump, they tend to get caught on the leading edges of the impeller vanes. The main culprit? Disposable wipes. In fact, the issue was so critical that it prompted SUEZ to launch an awareness campaigns, aimed to inform the public about the consequences of flushing wipes, under the theme of “Abracadabra, what you throw in the toilet doesn’t just disappear as if by magic” (even if manufacturers indicate on the packaging that it is safe to do so). While the merits of the campaigns are not in question, the results were unfortunately not felt in the pumps, and they continued to clog at the same rate as before. 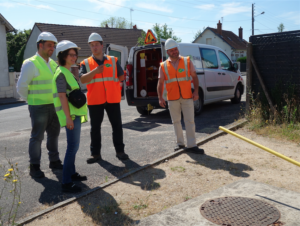 “The small stations tend to be more problematic than the large ones, especially clogging due to the small discharge diameter,” explains Olivier Jarry, Sanitation Manager for Suez Eau France business for the Gien district. “In this separate wastewater network, the outlet diameter of the pumping station is 65 mm. We were very aware of the Flygt Adaptive-N™ self-cleaning technology on the larger pumps that eliminated clogging. We were convinced that it was what we needed. However, it was only available starting at 80mm. We have enjoyed a longstanding relationship with Xylem, so as soon as we heard that the technology was to become available on a new compact range for discharge of 50 and 65 mm, we jumped at the opportunity to acquire the equipment.”

The decision proved to be a good one judging by the fact that so far, at the time of the visit, the pump had been in operation for three months without clogging a single time. Since the new pump still works in tandem with the second older vortex model in the pair, the station still needs to be serviced to unclog the vortex pump, waiting for its replacement by a Flygt 3069. The difference is that knowing that the 3069 will continue to pump without blocking, the interventions are now scheduled within a regular program – no weekends or middle-of-the-night calls.

“Eliminating unscheduled service calls not only reduced costs in overtime and weekend hours, it also improves our working conditions”, says Olivier Jarry. “The job involves a two-man crew, not just for safety concerns but also because the pump has to be removed from the pumping station to be unclogged. Scheduled visits can be carried out in the proper conditions. The benefits for the residents are also significant as each time the pumps stop it can cause an inconvenience, not least the possibility of an unpleasant whiff in the backflow, and eventually even have potential environmental repercussions.”

Each time the two-man crew unblocks the station it generates important maintenance costs. Taking as a basis a frequency of three monthly incidents, Jean-Christophe Chambault estimated that the pump pays for itself in two months.

“This is a miracle solution” says Jean-Christophe Chambault. “We are now studying the replacement of the second pump in the pumping station. At any rate, if it doesn’t happen sooner, the 3069 will be without a doubt the choice to replace the second pump at the end of its lifecycle. Then we will have no more problems beyond the normal inspections and maintenance.”